Trending
You are at:Home»Fruits»Health benefits of Oregon Grape 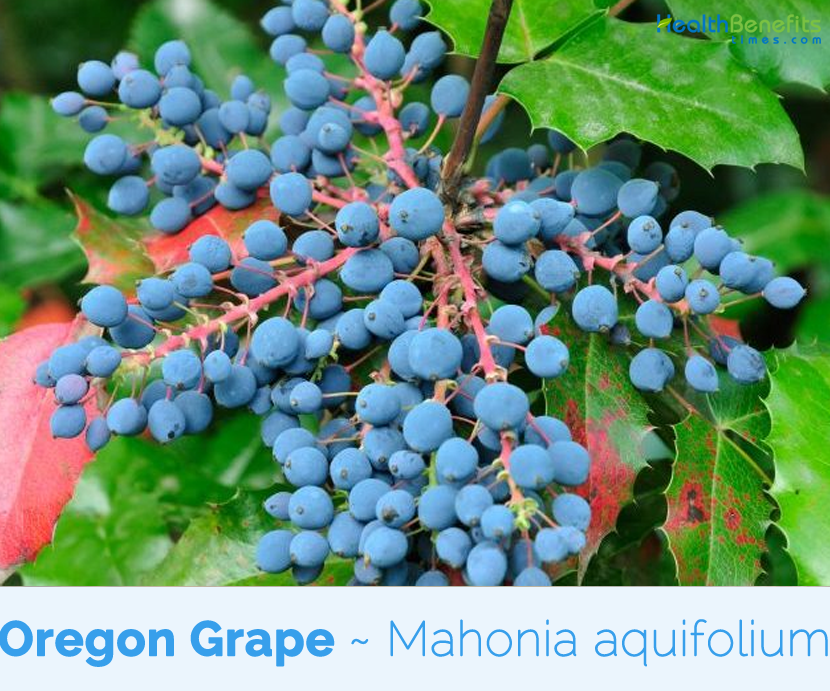 Genus name Mahonia honors Bernard M’Mahon, American horticulturist and author of The American Gardener’s Calendar (1806). The specific epithet aquifolium represents “sharp-leafed” (as in Ilex aquifolium, the common holly), referring to the spiny foliage. Both the roots and rhizomes have been used medicinally for hundreds of years to treat infections because of their powerful antibiotic properties. The plant contains the alkaloids berberine and hydrastine.  Berberine is extremely bactericidal, amoeboidal and trypanocidal.  Oregon grape extracts were shown in one pharmacological study to reduce inflammation, and to stimulate the white blood cells known as macrophages.  Roots are used in herbology as a nutritional aid to the digestive and circulatory systems. The fruit is an excellent gentle and safe laxative.

Oregon grape is a medium-sized, broadleaf evergreen shrub that grows about 1–2 m (3 ft. 3 in–6 ft. 7 in) tall by 1.5 m (5 ft.) wide. The plant is found growing in relatively dry to moist rocky sites in open coniferous forests, and forested slopes. The plant does best in partial shade in moist, rich, well-drained, acidic soils and is intolerant of alkaline pH soils, poor soils, compacted soils, clay soils, wet soils, heat, full sun, exposed sites, or at windswept corners of foundations.  The plant has deep vertical taproot and a network of fine roots in the upper layer. It is 1-4 cm in diameter, covered by a thin outer bark that covers a bright yellow inner bark. Twigs are light brown, fairly stout, virtually unbranched, and with a coarse texture with corky, gray brown colored bark.

The stiff and leathery leaves of Oregon grape are technically leaflets, since the leaves are pinnately compound. The leaflets are flat and toothed. There are generally seven to nine of them in a leaf. They are arranged in two parallel rows and are joined to the leaf stem without a stalk. At the tip of the leaf there is a terminal leaflet that is joined to the stem with a stalk. There is a very noticeable vein down the center of each leaflet.

The leaflets are usually medium to dark green in color. They may have attractive red or bronze patches at times, such as when they are first produced, and they are often red in winter. The upper surface of each leaflet is waxy. The lower surface is not as shiny and is a paler green color. The leaves are used in floral arrangements because they stay in good condition for a long time after they’re picked.

Flowers and berries of Oregon grape are brightly colored and beautiful. The plant is very noticeable when it’s in bloom or when it bears berries. Flowers are bright yellow and are arranged in attractive clusters. Each flower has six yellow petals and six outer sepals of the same color. Six stamens (the male reproductive structures) and one pistil (the female structure) are located in the center of the flower. Flowering normally takes place from January to May. These mildly fragrant flowers are followed by Ellipsoid berries. These berries are initially green maturing to a blue-black color with a white cast. Berries are tart but they taste good when sweetened. These berries are wonderful for making jam, jellies. The correct identification of the plant is vital if the berries are being collected for food. It’s also important that the berries are collected from an area that is free of pesticides or pollutants. Berries in clusters look like small grapes while the foliage is holly-like in appearance.

Oregon grape is known for its anti-inflammatory, antibacterial, and antifungal properties and its extracts have been used to treat physical complaints like dysentery, jaundice, peptic ulcers and a variety of skin conditions as well. Additionally, the extract is extremely beneficial for psoriasis, eczema, athlete’s foot, acne and other fungal infections. It also eases inflammation, itching and irritation. Listed below are few of the popular health benefits of using Oregon grapes

Prolonged sadness, anxiety, the absence of appetite, insomnia or excessive sleepiness is some common signs of depression. Deficiency of neurotransmitters like serotonin, noradrenaline, and dopamine in the brain leads depression.

Monoamine oxidase (MAO) is an enzyme that decomposes these neurotransmitters. Research has given indicators that berberine has the ability to inhibit MAO activity and relieve symptoms of depression. By inhibiting MAO, berberine raises the concentration of key neurotransmitters in the brain, giving a clear improvement in the pharmacological treatment of depression.

Berberine present in Oregon grape helps to slow abnormal cell growth in the skin and reduces inflammation. It can relieve the itching caused by skin conditions such as acne, eczema, psoriasis and allergic rashes.

When used on the skin, Oregon grape has been found to combat certain skin irritations. Researchers have concluded that herbal remedies are often more effective on dermatological conditions than pharmaceuticals, and the Oregon grapes power to help fight psoriasis and atopic dermatitis would seem to support that claim.

Oregon grape root is famous among herbalists for its ability to stimulate liver function, improve the flow of bile, and for blood cleansing. Oregon grape root uses have traditionally included treating both liver congestion and infectious conditions of both the stomach and intestines. Another benefit of Oregon grape root is its functioning as an antimicrobial.

Oregon grape berries act as antifungal. Berberine found in Oregon grape is potential to fight against a wide range of bacteria and fungi. Berberine has the ability to prevent the growth of various Candida species, including Candida albicans.

There is also an indication that berberine kills Candida yeast strains that have become resistant to pharmaceutical antifungals such as fluconazole. Researchers discovered that Berberine was not only capable to inhibit the growth of the Candida strains, but to destruct the yeast cell until it could not survive. It could also destroy the Candida albicans plasma membrane.

Berberine works on human cell’s DNA to prevent amoebas from take hold in the body. To consume this herb you can take it effectively as tinctures, glycerites, capsules, powder, oil, and salves. It’s very useful to take Oregon grape on trip with you where the hygiene is poor.

Oregon grape root consists of a number of alkaloids that give it a very bitter taste that can take some getting used to if taken straight. However, the positive benefits of these alkaloids far outweigh the momentary discomfort that their bitter taste may cause. In China, where Oregon grape root is also replaced for the herb coptis, research have shown that one of the alkaloids the plant contains, berbamine, can help strengthen bone marrow and assist chemotherapy and radiation patients in their recovery.

Oregon grape is wonderful to fight against cancer. Researches have shown the relationship of berbamine and cancer-killing effect. Researchers have found that not only does berbamine aid with healing liver cancer, but it also helps with certain lung and stomach cancers, blood cancers, certain skin cancers, and an aggressive (highly metastatic) type of breast cancer.