Trending
You are at:Home»Herbs and Spices»Health benefits of Red Sage 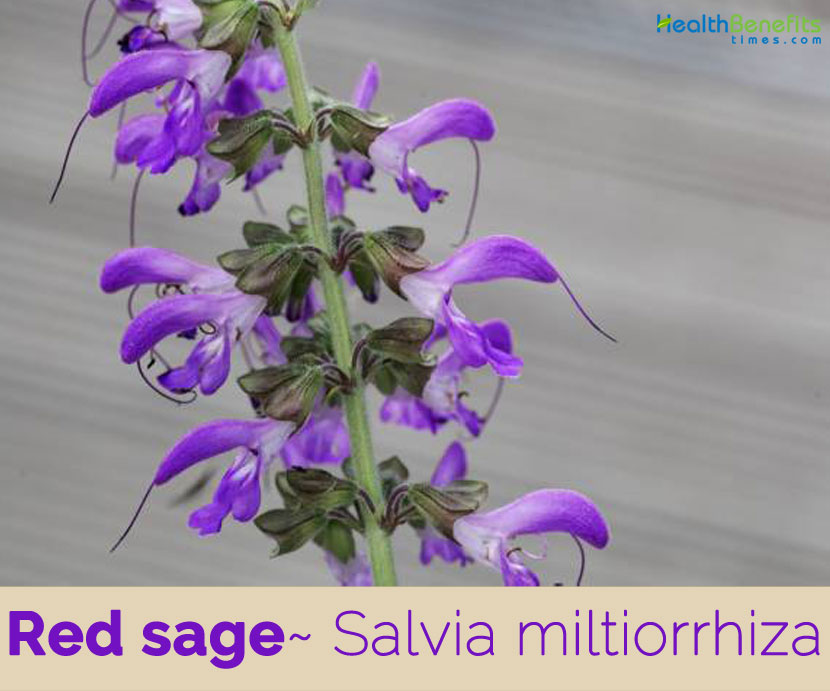 Salvia miltiorrhiza, also known as red sage, Chinese sage, is a perennial plant in the genus Salvia and belongs to the mint or deadnettle family (Lamiaceae). It is part of the mint family. The plant’s roots are called Danshen and have been used in Traditional Chinese Medicine for over 2000 years. (+,+)The plant is native to China and Japan and is cultivated for commercial use in northeast China and Mongolia; it grows at 90 to 1,200 m (300 to 3,940 ft.) elevation, preferring grassy places in forests, hillsides, and along stream banks. Chinese salvia, Redroot sage, red sage, Dan shen, Danshen, Radix, Tan-shen, Tanshen, red-rooted sage are some of the popular common names of the plant.

It’s Latin name salvia, meaning “health”, “salvation” or “to save”, refers to the plant’s powerful healing properties. The specific epithet miltiorrhiza means “red juice extracted from a root”. It is used in many parts of the world to treat various conditions due to their excellent medicinal values. It is rich sources of tanshinone I, tanshinone II, miltirone and salvianolic acid and a wide range of chemical compounds. The root and rhizome of this plant have been used as traditional Chinese medicines for more than 2 500 years. Root and rhizome has been developed into various kinds of herbal medicine products and used in at least 19 countries or regions for their therapeutic value and market potential in the treatment of cardiovascular diseases, neurasthenic insomnia, liver fibrosis and cancer. It has also been used as an ingredient in health supplements and cosmetics.

Red sage is a hardy, deciduous, perennial flowering plant that normally grows about 80 to 100 cm tall. The whole plant is covered with dense yellowish pubescence and glandular hairs. The plant is found growing in hillsides, stream sides, forests, light woodland, clearings and sunny sides of hills in the west and southwest provinces of China. The plant prefers moist, sandy and well-drained soil and full or half sun. Roots are long, thin, cylindrical, and covered with earthy red skin. Stems have four prisms and branch on upper part. The herb is propagated by root division in spring. The root is harvested from late autumn through to early spring.

Leaves are simple, opposite and with odd pinnate.  Petiole is 1.3-7.5 cm, densely retrorse villous, petiolule 2-14 mm. Leaflets are about 3-7 and are 1.5-8 cm long and 1-4 cm wide, blades or leaflets are circular to broadly lanceolate, pilose, densely so abaxially, margin crenate and apex acute to acuminate. Both surfaces of the leaves are covered densely with white pubescence.

The inflorescence is terminal and axillary verticillaster, with 3 to 10 flower each round and an alienated raceme arranged by many rounds of flowers and covered with hairs and sticky glands. Flowers grow in whorls, with light purple to lavender blue corollas that are nearly 2.5 cm (0.082 ft.) long, with a dark purple calyx. Flowering normally takes place from June to September.

Fertile flowers are followed by 3.2 mm long and 1.5 mm wide, oblong nutlets that are dark brown or black when ripe, and wrapped in persistent calyx. 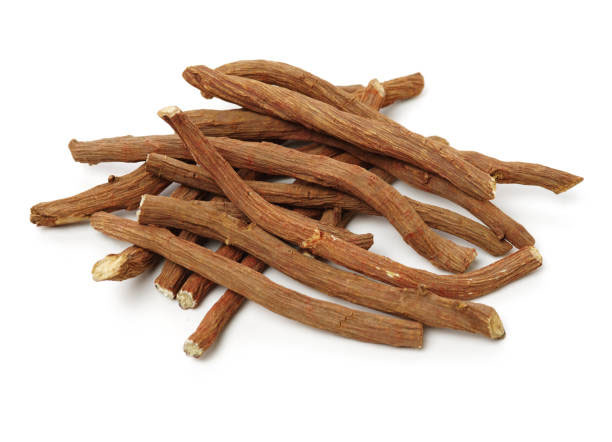 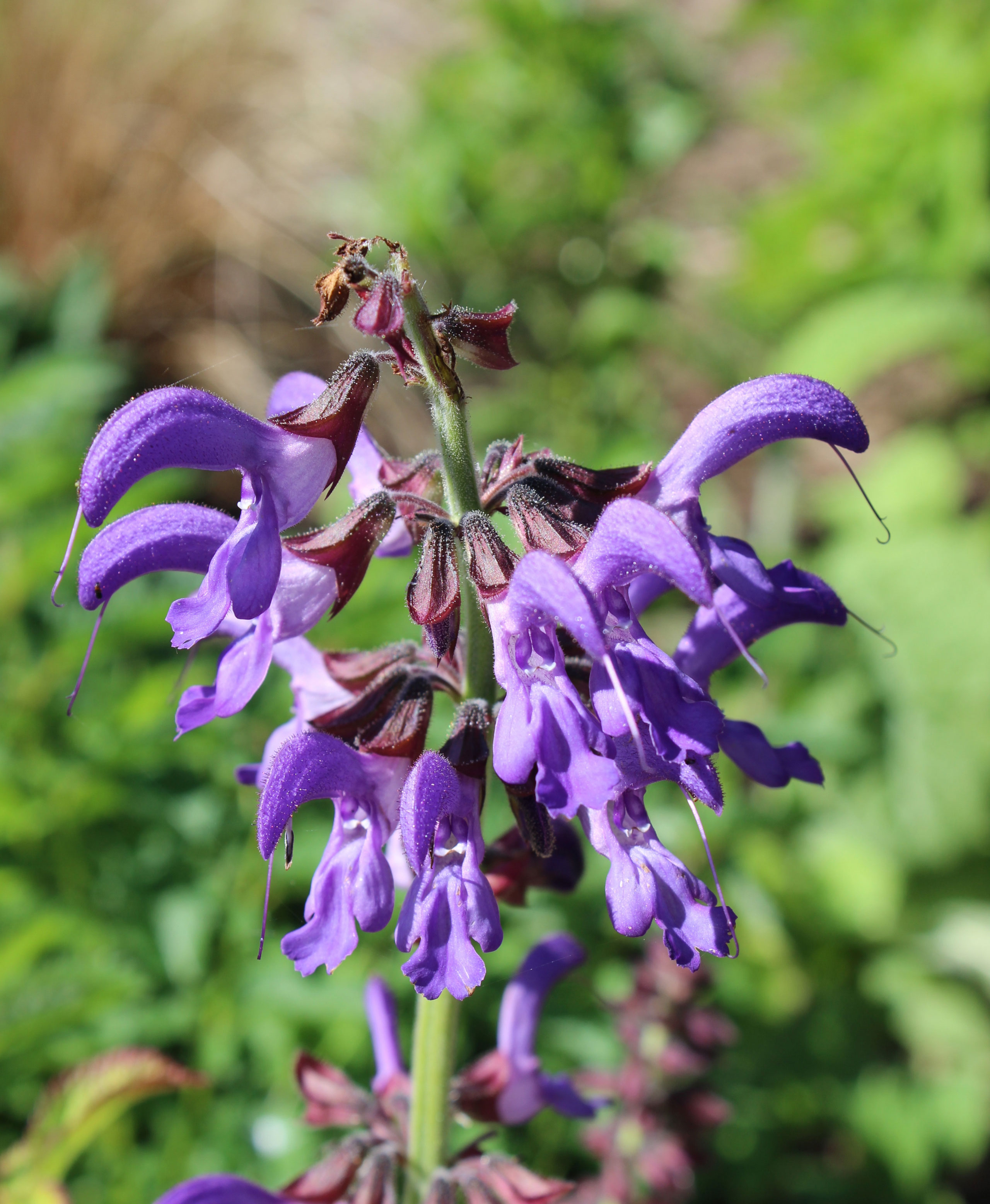 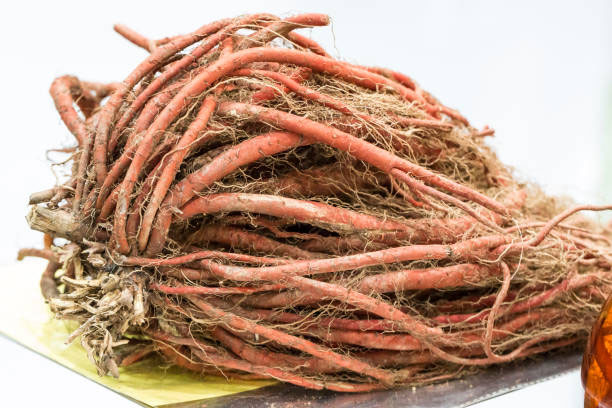 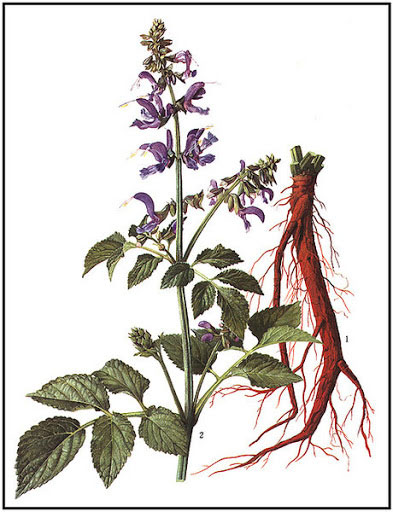 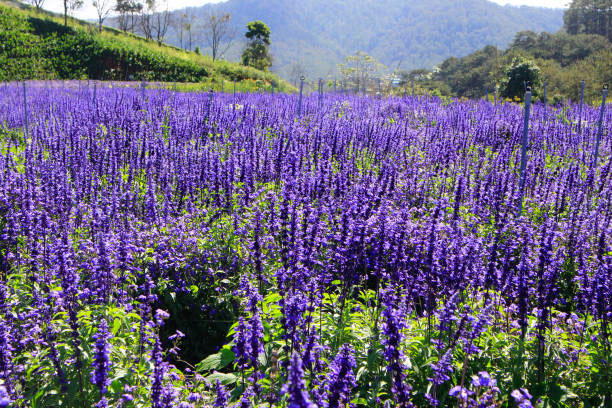 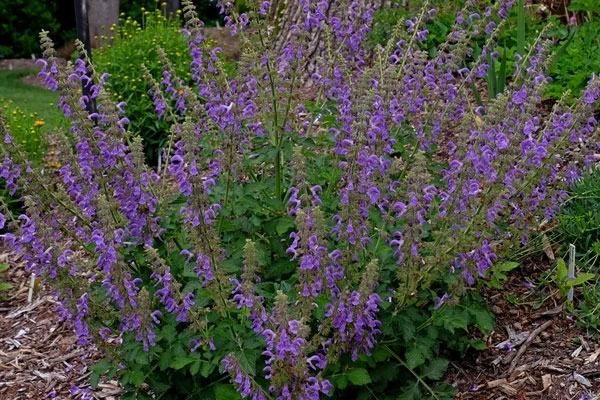 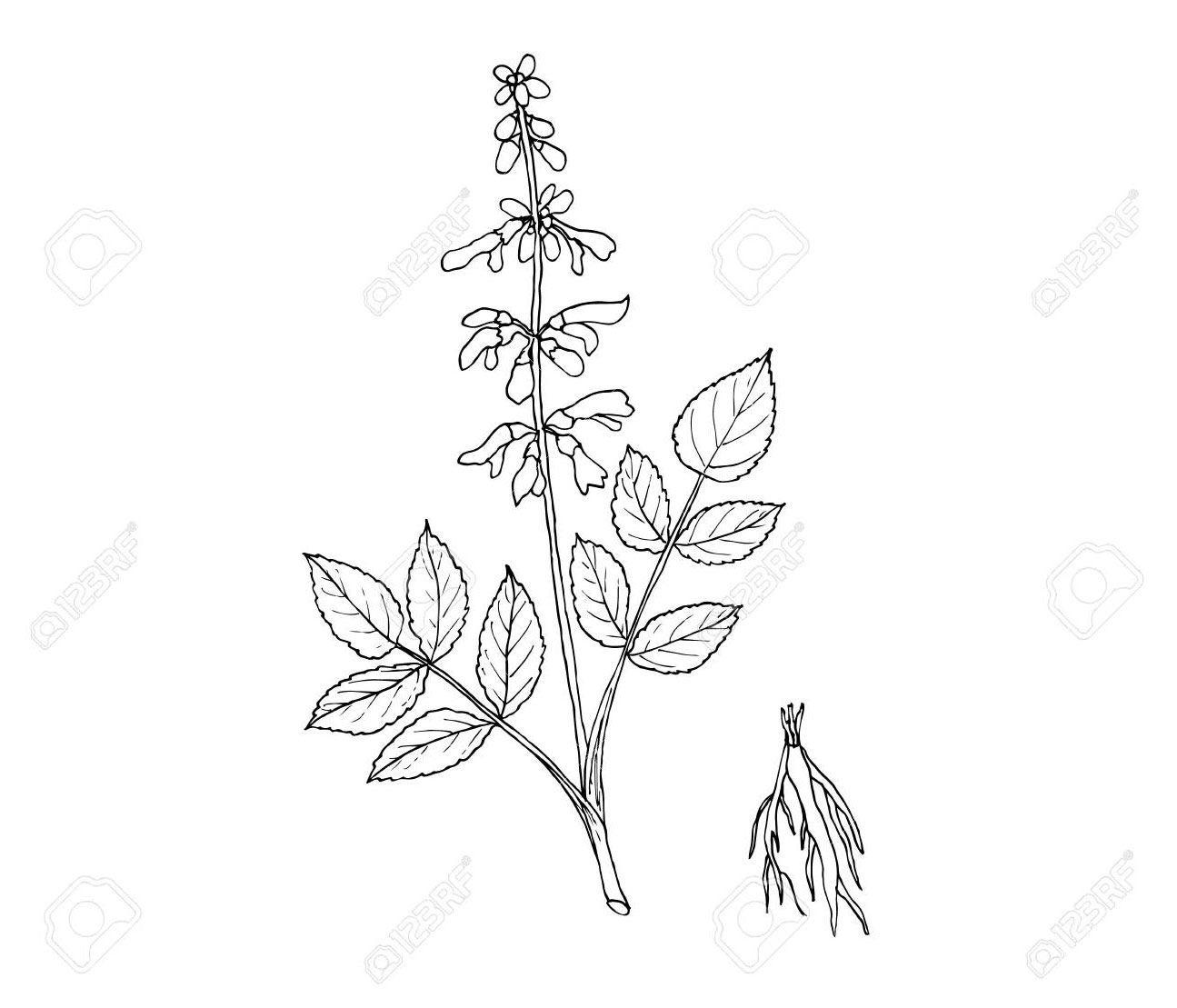 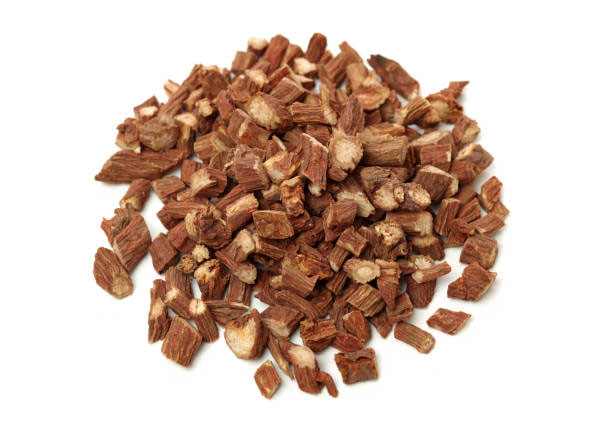 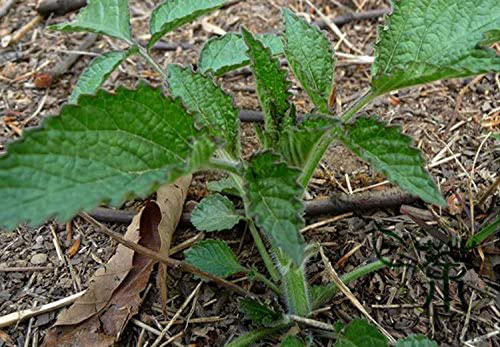 Danshen is a powerful herb with a lot of properties that could improve your health. It is presently going through trials and may even become the first traditional Chinese remedy to gain approval by the U.S. Food and Drug Administration (FDA). Below are some of the well-known benefits of Red Sage

The whole herb (rather than isolated constituents) has been used in China to assist patients who are recovering from a heart attack, and it appears to support heart function at this critical time. Clinical research in China, however, has shown that Red sage is most effective when taken as a preventive, rather than as a remedy after the heart attack has taken place. (1)

Red sage has been honored by the Chinese for thousands of years as a circulatory stimulant. Like hawthorn, it is a safe effective remedy for many circulatory problems. It mostly benefits the coronary circulation, opening up the arteries and improving blood flow to the heart, and is thus supportive in treating coronary heart disease. Although it does not lower blood pressure, it relaxes the blood vessels and improves circulation throughout the body.

Red sage is used traditionally to treat conditions caused by blood stagnation, mainly those affecting the lower abdomen, such as absent or painful menstrual periods and fibroids.

The sedative action of Red sage helps calm the nerves, and it is thus helpful in treating angina, a condition made worse by anxiety and worry. Palpitations, insomnia, and irritability also benefit from Red sage’s sedative properties.

Red sage is a soothing remedy that is used to remove “excess heat,” mostly in the heart and liver. It can also relieve inflammatory skin problems, such as abscesses, boils, and sores.

Salvia miltiorrhiza is commonly taken for menstrual problems like irregular bleeding. There isn’t actually much hard evidence that it has an effect. It just hasn’t really been studied, so most of the evidence relies on clinical use in traditional medicine and not on severe trials.(2), (3)

Danshen also has estrogen-like effects in rats, which may help improve menopause symptoms.(4)

Red sage kills certain species of bacteria, including bacteria that are resistant to antibiotics, in dishes. Moreover, it was used to make a silver-based compound that can kill both bacteria and the mosquitoes that spread the Zika virus.(10), (11), (12)

Red sage root is also believed to help prevent stroke recurrence. Naoxintong capsule, which consists of Red sage root, is in Phase IV of clinical trials. The capsule is effective at preventing the recurrence of strokes after the first stroke and decreasing the negative impacts of strokes. These studies, combined with the heart medication studies, show that Red sage root is coming to be recognized as a powerful ingredient in Western medicine.(14)

Research has shown that Red sage root is an effective treatment for liver fibrosis, which is the buildup of scar tissue, due to hepatitis B. Over time, scar tissue can prevent the blood infusion in the liver, hardening the cells. Red sage root compound called salvianolic acid B was shown to inhibit the production of cells, called LX-2, that become scar tissue. Fibrosis has varying levels of severe ness with cirrhosis as the most severe. Applying Red sage compounds during the less severe stages could help prevent degeneration into severe cirrhosis. (15)

Clinical trial is presently recruiting patients for testing the effects of Red sage root in treating poor vision and blindness, which can stem from diabetes. Degeneration of vision is often caused by bulging or leaking blood vessels. Though this study is evaluating a non-heart condition, the study demonstrates that Red sage root is capable of treating blood-based disorders in other areas of the body.(16)

Red sage root has been used to treat menstrual cramps for millennia in China; the treatment may soon be available in the United States as well. Red sage root promotes a healthy menstrual cycle when sharp fixed pain and clotting of the blood occur, another form of ‘blood stagnation.’” Research is presently underway examining the efficacy of treatments from two different areas in China. If approved, a Red sage based menstrual drug would be a more natural alternative to Midol.(17)

As a tea (infusion): Add 1/2 or 1 teaspoon of the dried herb to one cup of boiling water, steep for 15 mins and then strain. For therapeutic reasons 1 cup, three times daily is often recommended. The tea can also be used as a gargle and mouthwash as required.

As a tincture: Take 30-60 drops, in water or juice three times daily.

As a fluid extract: Take 15-30 drops, in water or juice three times daily.

For all commercial preparations containing the herb, the manufacturer’s instructions should be followed.