Trending
You are at:Home»Fruits»Health benefits of Rose hip 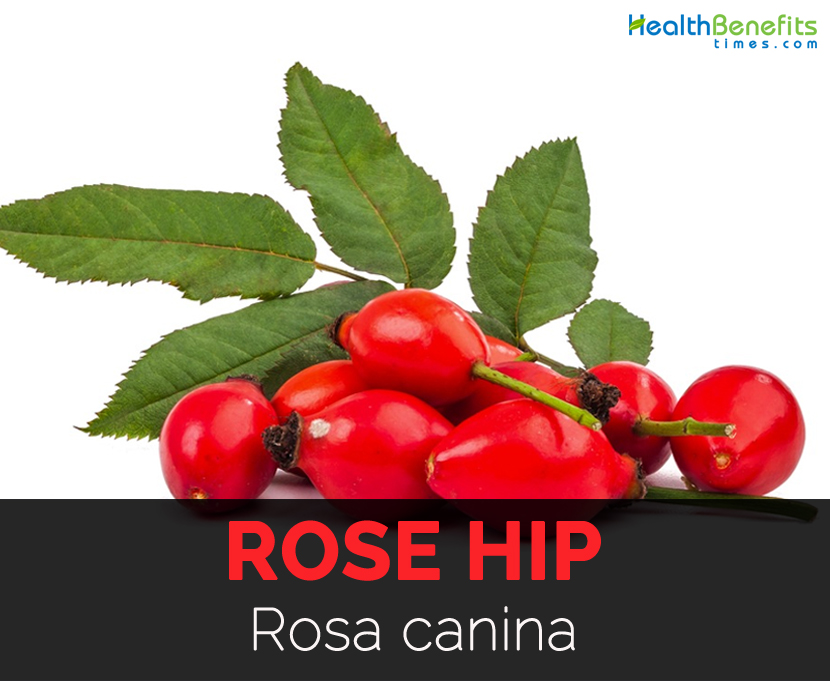 Rose hips are a round portion of rose flower which are found below the petals. It contains seeds of rose plant. Rose hips are fruit of rose plant which forms in autumn and late summer after the rose plant is pollinated. When the rose bud falls, the fruit of the plant arises. The fruit is red and could purple, orange or black. Rose hips could be found in the form of jellies, jams, bread, tisanes, soups, pies, wine and marmalade. The seeds and dried rose hips are used to make medicines. Rose hips have high content of Vitamin C which helps to prevent and treat flu, colds and Vitamin C deficiency. The vitamin C found in Rose hips is destroyed during drying and processing. Rose hips are used to treat stomach disorders such as spasms, ulcers, stomach irritation and stomach acid deficiency. It is useful for constipation, diarrhea, gallbladder ailments, gallstones, gout, edema or dropsy, high cholesterol, diabetes, chest ailments, weight loss and fever.

Apothecary’s rose is a perennial shrub growing to 5 feet (1.5 m), with sharp thorns, serrated leaves, and delicately scented, deep pink flowers. Native to the Middle East, it’s been cultivated around the world for centuries. Hybridization of the apothecary’s rose gave rise to the strongly scented damask rose (Rosa × damascena) and Provence rose (Rosa centifolia) from which essential oils are commonly extracted. The dog rose (R. canina) with sweet- scented white or pink flowers and more delicate stems and sharp thorns is found in the wild and self-seeds. Neither need much attention except to control their tendency to spread.

Renowned for lifting the spirits, this queen of flowers is used in folklore to make or mend alliances, and as an aphrodisiac. Used by the Romans in festivities where petals were eaten, roses were valued in monastic gardens both spiritually, as symbols of Christ’s blood, and for their healing powers. Traditionally used as an antidepressant—the first-century Arab physician Avicenna prepared rose water, while sixteenth-century British herbalist John Gerard said, “The distilled water is good for the strengthening of the heart, and refreshing of the spirits, and likewise for all things that require a gentle cooling.” Hips are used as a sedative in herbal medicine and the essential oil (“attar of rose”) is used in aromatherapy as an antidepressant, a sedative, and for pain relief in arthritis.

Diabetes mellitus is an endocrinal disorders and medicinal plants which plays a vital role in managing diseases. Rosa canina is used for antioxidant as well as α-amylase inhibition activities. The methanolic extract of Rose hip shows total phenol and flavonoid contents. Besides antioxidants, it is able to detain starch digestion by the way of inhibition of digestive enzymes. Results show that methanolic extract of Rose hip helps to inhibit α-amylase with higher degree of inhibition. Rose hip could delay digestion of starch which follows carbohydrate consumption of dense meal. The infusion of Rose hip is helpful to control diabetes. (1)

Rose hips contain antioxidant and antiproliferative properties on human cancer cell lines. The tested compounds were vitamin C, total extract, acidic polyphenols and neutral polyphenols. The extracts showed high cytotoxicity both low and high concentrations after 72 hours. An analysis of flow cytometric revealed that fractions produce disturbances in cell cycle results in a concomitant cell death by apoptotic pathway. Exposure of cells to hydrogen peroxide in presence of plant fractions and lowered production of Reactive Oxygen Species (ROS). The data indicated that extracts of rosehip acts as powerful antioxidant which produce antiproliferative effect in Caco-2 cells. These results show the promising future for Rosa canina. This plant could be effective component for functional foods which is addressed for colorectal carcinoma. (2)

Research was made to identify the biochemical compounds found in Rose hip fruits. It was reported that Rose hip fruit contains high content of ascorbic acid, flavonoid and phenolic content, anticarcinogenic, antimutagenic and antioxidant activities. The study was conducted for evaluating main phytochemicals such as total polyphenols, vitamin C and total flavonoids content and antioxidant activity. The content of Vitamin C fruit varies according to the altitude and biotype. Antioxidant and polyphenol content are the parameters of quality for rosehips for its biological properties. (3)

The study shows that extract of rose hip lowered the growth and migration of breast cancer cells. The high content of rose hip extract had lowered migration of breast cancer cells by 45%. Extract of fruit prevent the growth of cancerous growth in brain which is a place where cells of breast cancer. The study focuses on the phytochemicals which are found in rose hip tea. Fruit have polyphenols which helps to prevent proliferation of human cancer cells. The study shows that rose hips have active components that prevent the chances of colorectal cancer. It possesses anti-inflammatory actions which contributes cancer preventive properties. It also contains bioactive compounds such as ascorbic acid, phenols, pectins and tannins which help to eliminate oxidative stress that could result cancer. Fruit effectively suppress inflammation. Tiliroside is a major flavonoid which provides anti-inflammatory properties.  Rose hips possess lycopene which is well known for its anticancer activities. It provokes communication between cells and its damage could result to increase in cancerous tumors.

The daily consumption of extract of Rose hip is associated with lowering levels of cholesterol. This fruit might be helpful for obese patients. The people who intake a drink of rose hip powder regularly for six weeks experience significant drop in levels of blood cholesterol by 5 percent. It could lower the chances of heart problems by 17 percent. It could be used as a secure alternative for anti-cholesterol drugs which might provide some side effects.

The study shows that patients who consume rose hip had greater improvements in arthritic conditions. The powder extracted from rose hip lowered pain in joints, hips and knees. This study was conducted on 300 osteoarthritis patients. It contains fatty acid GOPO which could contribute anti-arthritic properties in this fruit. The pill of Rose hip helps to lower arthritic pain by 90 percent. LitoZin which is a popular arthritic medicine is prepared from processed ground rose hips. Other important quality is that it does not contain ulcerogenic effects like other medications.

The oil extracted from rose hip fruit is used to promote skin health. Vitamin C promotes the collagen production and lowers the appearance of fine lines and wrinkles. Vitamin A enhances the moisture content of skin. This oil helps to counteract UV damage caused by sun. The antioxidants help to promote the tone and texture of the skin and also treat pigmentation. This oil has essential fatty acids which prevents scarring and promote skin regeneration. But it should not be applied to acne directly. Rose hip oil is able to regenerate new skin cells and useful in treating burns acne and scars. It rehydrates skin and keeps the moisture in. Drink rose hip tea regularly to get skin benefits.

Polyphenols, flavonoids and carotenoids are found in Rose hips which act as powerful antioxidants that help to neutralize or eliminate free radicals from the body. It is the byproducts of cellular metabolism which could damage healthy cells that cause mutation into cancerous cells. Lack of antioxidants or free radicals is associated with heart diseases, cancer and premature aging. Rose hips have antioxidants which keeps the body healthy.

Vitamin C found in Rose hip is vital for the production of collagen. Collagen with other minerals helps to prevent the chances of osteoporosis by maintaining density of minerals and keeps the bones strong and flexible.

In humans: Initial studies show rose scent increases measures of parasympathetic (rest) activity and induces feelings of contentment. Essential oil relieves anxiety during labor and depression and (with lavender) anxiety in postpartum women. It relieves pain in children, menstruation, lower back and migraine in controlled trials. It improves sleep quality in coronary care patients and sexual function (in males and females) in major depression. Rose water reduced anxiety in renal patients and hips improved wellness ratings and lower blood pressure and back pain in other pilot studies.

In the lab: The petals, essential oil, and hips (wild, R. canina) are antidepressant, antianxiety, anticonvulsant, hypnotic, analgesic, and neuroprotective in lab tests.

The expensive pure essential oil is a mix of plant terpenes including the calming and uplifting citronellol, geraniol, linalool (also in lavender), and nerol  (also in bitter orange). As with lemon balm oil, beware of imitations spiked with other cheaper oils or chemicals. Hips contain flavonoids and polyphenols.

The essential oil is commonly used in aromatherapy. Rose buds make one of the best botanical teas, fresh rose petals can be added to salads and hips make perfect jellies and syrups to eat on toast or with cheese or red meats. Rose water (extract of flowers) can be used in cocktails such as gin fizz.

The side impact symptoms of rose hip usually are not quite normal.

It is recommended not to breathe in rose hip powder. It’s been researched that breathing in the rose hip powder start stern irritation within the lungs.

The skin use items that consist of rose hip extracts needs to be utilized very carefully. Research claim that rose hip may cause negative effects to the skin, different from minor skin irritation to main skin reactions as well as inflammation and also itching of skin.

Consumption of rose hip may cause numerous intestinal problems. Consuming more than 3g of rose hips each day may cause stomach cramping, stomach upset, gas, bloating, vomiting, and also diarrhea.

Being a natural plant part it is extremely natural for rose hip to stimulate several allergy symptoms. Itchiness, skin rashes, inflammation of throat or even tongue, inhaling and exhaling difficulty, and also lightheadedness could be brought on because of rose hip usage.

Buds, petals, hips, and essential oil in diffusers are safe, including for children.