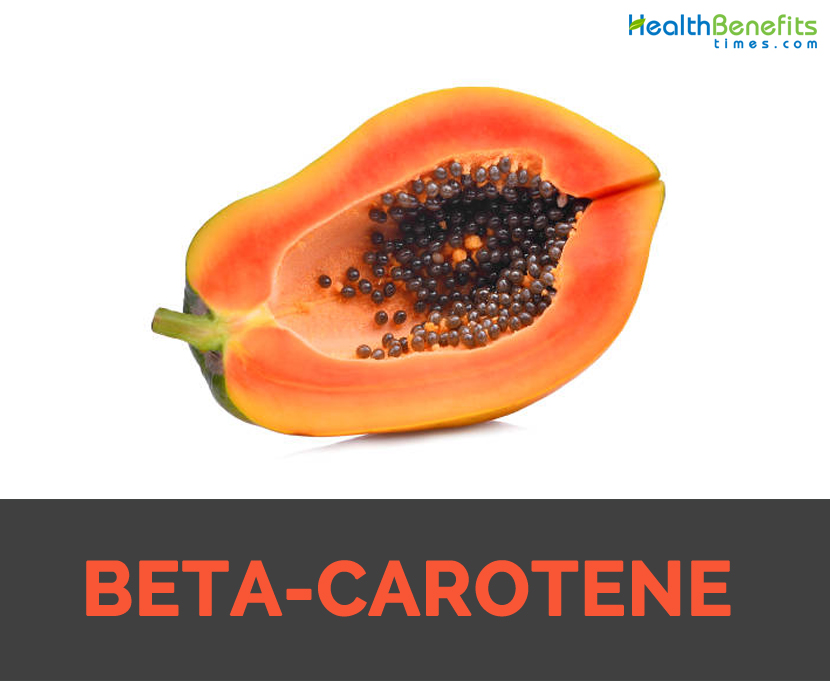 Beta-carotene is classified as a carotenoid, a class of phytochemicals. Carotenoids are a group of plant pigments that are the basis for the orange, red, and deep yellow colors of many fruits and vegetables, including carrots. Although there are more than 600 carotenoids found in nature, only about 50 are in the typical human diet. The six most common carotenoids found in human blood are alpha-carotene, beta-carotene, beta-cryptoxanthin, lutein, lycopene, and zeaxanthin. Of these, the body can convert only alpha-carotene, beta-carotene, and beta-cryptoxanthin to retinol. These are referred to as provitamin A carotenoids. Provitamins are inactive forms of vitamins that the body cannot use until they are converted to their active form. Beta-carotene protects the lipid portions of cell membranes and LDL-cholesterol from oxidative damage. It also enhances immune function and protects vision.

Beta-carotene and some other carotenoids are identified to have antioxidant properties. Like vitamin E, they are fat soluble and fight the harmful effects of oxidation in the lipid portions of our cell membranes and in our LDLs; however, compared to vitamin E, beta-carotene is a relatively weak antioxidant.

How much Beta-Carotene should we consume?

Nutritional scientists do not consider beta-carotene and other carotenoids to be essential nutrients, as they play no known essential roles in our body and are not associated with any deficiency symptoms. Thus, no RDA for these compounds has been discovered.

It is safe to consume 6 to 15 mg of beta carotene per day i.e. equivalent to 10,000 to 25,000 units of vitamin A activity which is about 70 percent of daily requirement for women and 55 percent for men. For children, 3 to 6 mg of beta carotene daily is sufficient.

It has been suggested that consuming 6 to 10 mg of beta carotene per day from food sources can increase the beta-carotene levels in our blood to amounts that may reduce our risks for some diseases, such as cancer and heart disease. Supplements containing beta-carotene have become very popular, and supplementation studies have prescribed doses of 15 to 30 mg of beta-carotene.

Beta-carotene and other carotenoids have antioxidant activity and are valued for its ability to prevent chronic disease. It protects body from damaging free radicals which are the primary cause of aging and degeneration. Study has shown inverse relationship between cancers and dietary carotenoids and blood carotenoid levels. Carotenoids could enhance health when used at dietary levels but have adverse effects when taken in high doses by people who smoke and have been exposed to asbestos.

Vitamin A is crucial for healthy development of fetus or newborn with lung development and maturation being important. It is required for toddlers and infants to build strong immune system. Research shows that there should by 40 percent increase in intake of Vitamin A for pregnant women and 90 percent increase for breastfeeding women.

Beta-carotene metabolism takes place in various organs including skin. Study shows that it prevents onset of UV-induced erythema, skin redness or irritation. Though it could not be compared to efficacy of sunscreen but evidence shows that beta-carotene could protect skin against sunscreen by promoting basal defense against skin damage caused by UV light.

Study confirmed the activity of beta-carotene in patients having oral leukoplakia characterized by thickened and white patches which form on gums and inside cheeks. Most leukoplakia patches are gentle but some may be an early signs of cancer. Research shows that due to its lack of toxicity, it delivers as a preventive agent for oral cancer.

Research shows that intake of fruits with beta-carotene that could promote respiratory or pulmonary function. People who consume fruit at least once a day had low respiratory symptoms such as shortness of breath, phlegm production and wheezing. Fruits help to combat respiratory conditions including papaya, mango and cantaloupe.

Beta carotene combat cancer with its antioxidant properties. Besides this, it helps to maintain cells in proper communication by preventing growth of cancer cells. Thus intake of beta carotene rich foods helps to lower the chances of colon, breast, lung cancer and oral cavity.

Vitamin A deficiency could cause dull, dry and lifeless hair. Dry scalp could flake off into dandruff. Intake of foods with high beta carotene could prevent these conditions.

What happens if we consume too much Beta-Carotene?

Consuming large amounts of beta-carotene or other carotenoids in foods does not appear to cause toxic symptoms. However, one’s skin can turn yellow or orange when consumed large amounts of foods that are high in beta-carotene. This condition is referred to as carotenosis or carotenoderma, and it appears to be both reversible and harmless. Taking beta-carotene supplements is not generally recommended, because we can get adequate amounts of this nutrient by eating more fruits and vegetables, and supplements may be harmful in certain populations.

What happens if we don’t consume enough Beta-Carotene?

No known symptoms of deficiency of beta-carotene and other carotenoids are known apart from beta-carotene’s function as a precursor for vitamin A. Deficiency of Vitamin A is common in developing countries where it is the major cause of preventable blindness in children according to WHO. Its indicator includes hair loss, night blindness, dry or inflamed eyes and skin irritation.