Trending
You are at:Home»Fruits»Roselle facts and health benefits 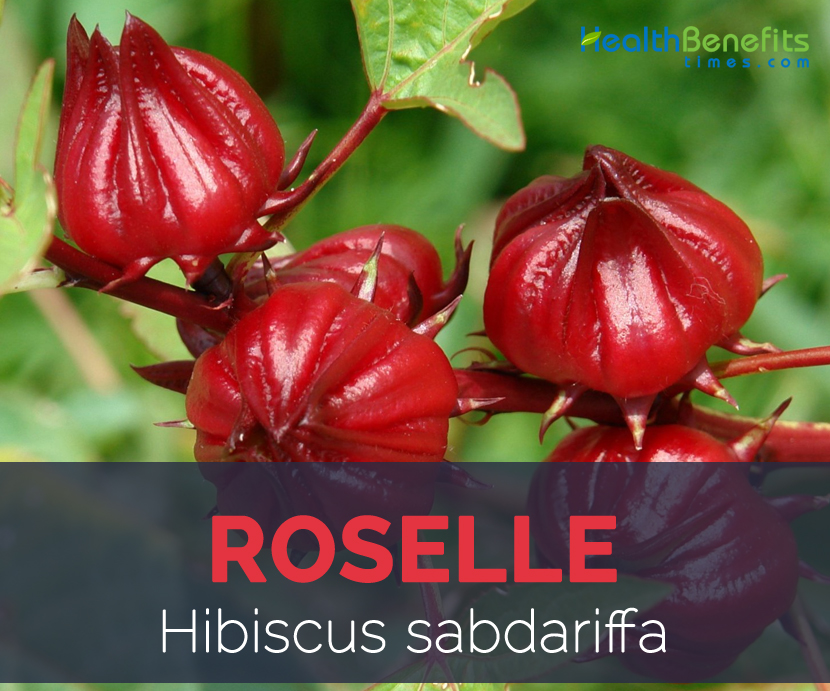 Hibiscus sabdariffa, or Roselle, is a shrub belonging to the Malvaceae family. In Iran, it is typically known as sour tea. In English-speaking countries it is called Red Sorrel. Originally from Africa and now widely naturalized in tropical and subtropical regions of the world particularly in India and Southeast Asia. It is widely cultivated in Africa, Asia, Papua New Guinea and the Pacific as a home garden crop. Apart from that it is a major crop of export in Sudan especially in western part where it occupies second place area wise after Pearl millet. It is actually a tropical  annual that is also known as Florida Cranberry, Guinea Sorrel, Hibiscus, Indian Sorrel, Jamaican Sorrel, Jamaica tea flower, Java Jute, Jelly Okra, Karkadé, Natal Sorrel, Nubia tea, Pink Lemonade, Queensland Jelly Plant, Red Sorrel, Red Tea, Rosella, Roselle, Royal Roselle, Rozelle, Rozelle Hemp, Sorrel and Sour-Sour. Botanically named Hibiscus sabdariffa, it is a member of the Mallow family and displays the characteristic five petals, funnel-shaped flower. Many parts of roselle including seeds, leaves, fruits and roots are used in various foods. Among them, the fleshy red calyces are the most popular.

Roselle is a broad-leaved, erect and branched annual herb, 2–2.5 m (7–8 ft.) tall. It has a deep penetrating tap root with bulbous, smooth or nearly smooth, cylindrical, typically red stems with spiny hairs. Plant normally grows in a warm and humid tropical climate and is vulnerable to damage from frost and fog. It prefers full sun as it is not shade tolerant. It does best in a well-drained, friable sandy loam soil rich in humus but is adaptable on many soils types— from sandy to clayey soils and can tolerate short periods of flooding.

Leaves are usually alternate, 3 to 5 in (7.5-12.5 cm) long, green with reddish veins and long or short petioles. Leaves of young seedlings and upper leaves of older plants are simple; lower leaves are deeply 3- to 5- or even 7-lobed; the margins are toothed.

Fruit of Roselle is normally dehiscent, 5-valved, non-fleshy, bright red ovoid capsule, 18–20 mm long by 15–18 mm wide. Fruit is green when young and turns into bright red as they mature and consists of 5 valves with each valve containing 3-4 seeds. Later capsule turns brown and split open when completely mature and dry. Seeds are normally kidney shaped, light brown, 3-5 mm long and covered with minute stout and stellate hairs. Fruit has tart fruity flavor similar to cranberry, rhubarb and red currant. Roselle is popular for its edible leaves and fleshy red fruit calyces that are used for making fresh salads, tea, juices, jellies, jams, ice cream, and spices for cooking. Roselle is also famous for its high nutritional and medicinal values. It is a wonderful source of antioxidants.

Roselle is probably native to Africa and now widely naturalized in tropical and subtropical regions of the world particularly in India and Southeast Asia. It is widely grown in Africa, Asia, Papua New Guinea and the Pacific. China and Thailand are the leading producers and dominate much of the world supply. Mexico, Egypt, Senegal, Tanzania, Mali and Jamaica are also important suppliers, but production is mostly used domestically.

Roselle has been used as a therapeutic plant for centuries. Traditionally, extracts treat toothaches, urinary tract infections, colds, and even hangovers. In Senegal, the juice of leaves treat conjunctivitis and, when pulverized, soothes sores and ulcers. Root concoctions act as a potent laxative. Natives of various countries drink tea to stabilize blood pressure and lower cholesterol. Listed below are some of the popular health benefits of Roselle

Calcium present in Roselle protects teeth by keeping the jaw bone strong and sturdy throughout your life, which in turn ensures tight fitting teeth where bacteria cannot thrive. Therefore, before your teeth and gums start giving you any trouble, be sure to maintain a calcium rich diet. Its intake should be high, especially at young ages, so that your children naturally grow up with strong teeth.

3. Treatment of the Common Cold

Roselle consists of Vitamin C which helps to enhance the immune system of our body, which protects us from colds and coughs. Apart from that it facilitates the absorption of iron and thus strengthens the body’s resistance to infection. It also fights against viruses.

Magnesium present in Roselle provides quick relief from constipation, and a high dose of water-soluble magnesium supplements is known to bring sound relief for even the most severe constipated state. The laxative property of this vitamin help to relaxes the intestinal muscles, thus helping to establish a smoother rhythm while passing bowels. It also has another property of attracting water, which in turn softens the stool and helps it to pass easily. Roselle consists of 29 mg of magnesium which is actually 6.90% of the daily recommended value.

Roselle consists of Phosphorous that has the ability to remove minor health problems like muscle weakness, numbness, fatigue and other similar ailments. Normal levels of phosphorous in the body are a great way to remain fit and active. A normal amount can be around 1200 mg for adults, according to experts and from suggestions of various health practitioners. Sexual weakness can also be cured with healthy supplementation of phosphorous into the body, so issues like loss of libido, frigidity, impotence, and sperm motility can be boosted by having an adequate supply of phosphorus in your system.

Other Traditional uses and benefits of Roselle