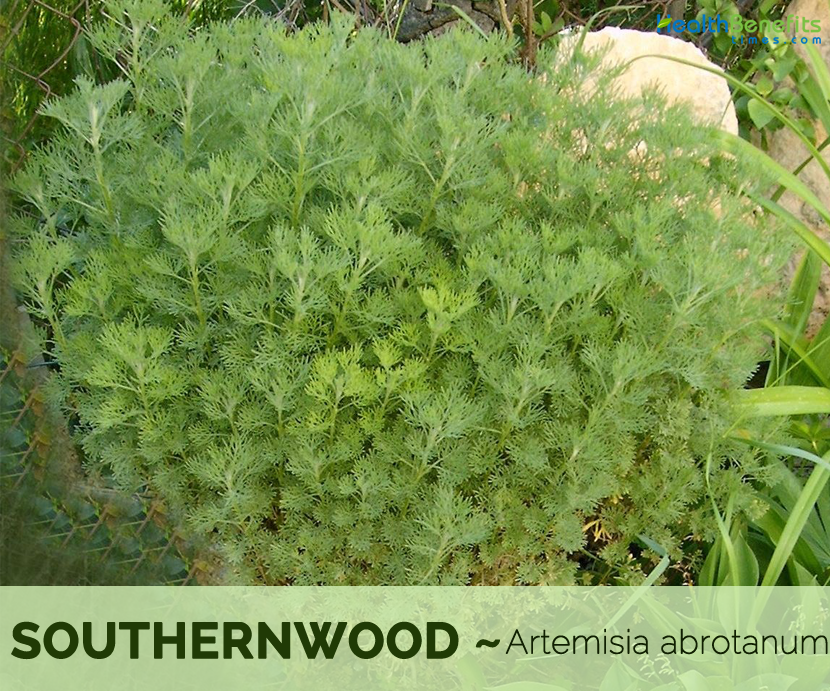 Southernwood, or Artemesia abrotanum, is a perennial woody shrub native to Southern Europe and we find much mention of it in Spain and Italy. It is known by many other names including Lad’s Love, Boy’s Love, Old Man, Southern Wormwood, Oldman Wormwood, Lover’s Plant, Appleringie, Garderobe, Our Lord’s Wood, Maid’s Ruin, Garden Sagebrush, European Sage, Sitherwood, Cola plant, Lemon Plant, maid’s love, maid’s passion, Sabbath day posy, slovenwood and sweet Benjamin. It belongs to the daisy (Asteraceae) family. The name ‘Southernwood’ has Old English roots and means “woody plant that comes from the south.” The genus name, Artemisia, is derived from the Greek word “abros,” which means delicate and stems from Artemis, the Goddess of chastity. Artemis was also known as Diana, the Mother of all Creatures and Goddess of the Herbalist, the Hunt and Wild things.

Southernwood is a highly aromatic, woody, perennial herb growing about 3 and 5 feet tall with a spread of about 2 feet across. Plant needs full to partial sun and sufficient moisture although they are tolerant of drought. They succeed in most soils, preferring a well-drained one that is not too rich. The plant has woody, upright-branching stems. Leaves are small, grey-green, narrow and feathery. They are silky when young, but nearly smooth when mature, the segments few in number, but very slender, 1/4 to 1/2 inch long, terminating in a point with their margins recurved.

Flower-heads are small and numerous, in long, slender, drooping racemes and the florets are yellow colored. They normally bloom from August and September. This herb rarely flowers, so it is best propagated by root division or via cuttings. Fruits are small, inconspicuous brown nut. The bitter, lemony scent of the foliage is appreciated in herbal teas. It is pleasant in small doses, but can become overbearing in larger doses. The aroma will keep insects away as it acts as an insect repellent. Branches are hung with clothes to prevent moth or insect damage, in which case it’s called garderobe or ‘clothes protector’. The branches can provide a yellow dye that works well with wool.

Traditional uses and benefits of Southernwood

Collect a handful of plantain leaves, southernwood, black currant and angelica leaves and one of elder flowers and place in a saucepan with a cupful of almond or olive oil. Simmer for 30 minutes and strain off the oil. Rewarm the oil and add 1 oz. white beeswax before removing to cool. Pour into jars before the mixture sets.

Simmer in a pan for 10 minutes a handful of leaves of rosemary, lemon balm, bergamot, hyssop, and Southernwood and lemon thyme together with a handful of chamomile flowers. There should be about 1 lb. of herbs to 2 pints of water. Then strain and when cold, add the liquid 1/5 part of brandy or whiskey which will keep it for 2 months. Use a little in a warm bath to tone the flesh, cleanse the skin of impurities and relax the muscles.

Boil a large bunch of lavender, southernwood or wormwood and tansy in 2-3 gallons of water for 10-15 minutes. Add ¼ cup vinegar, and then cool. Strain the mixture and pour into a bucket. Mop floors for a cleansing, pleasing fragrance.