Trending
You are at:Home»Foods»Tapioca health benefits 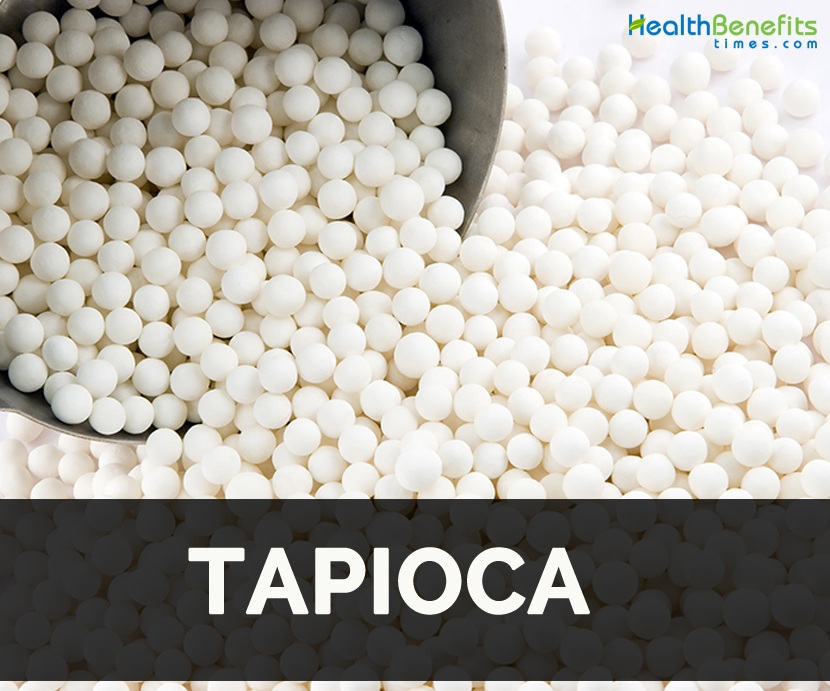 Tapioca is a starch which is extracted from cassava root scientifically known as Manihot esculenta. It is inherent to northeast region of Brazil and its use has been spread throughout South America. The plant was brought by Spanish and Portuguese explorers to West Indies, Asia and Africa. It is a perennial and tropical shrub which is less cultivated in temperate climate zones. It thrives in poor soils than many other food plants. It has become a staple food for millions of people in tropical countries. It is low in vitamins, protein and minerals and provides only carbohydrate food value. It is used as a thickening agent in assorted manufactured foods.

Recently, Tapioca has become a gluten free alternative to other grains such as wheat. In Brazil, cassava (the plant) is called mandioca and its starch is known as tapioca. The term Tapioca is derived from word tipi’óka from Tupi language spoken by natives when around 1707, Portuguese first arrived in Northeast Region of Brazil. The word Tupi refers to the process by which the starch is formed to be edible.

Here are some health benefits that Tapioca offers:

Allergy has become a common health problem nowadays and people are becoming careful about the food which causes allergy. Food allergy is mostly consumed by the consumption of grains, nuts and gluten. The intake of Tapioca will not worsen the problem or could be an effective solution for those who suffer from celiac disease which is a type of allergy in which people could not digest gluten. Tapioca could be used as a substitute for baking cake or to thicken soups, sauce, gravy and other foods without the possibility of allergy.

High cholesterol is not good for body as it causes the plaque buildup within blood vessels especially artery wall known to be atherosclerosis. If this condition is ignored then it severely causes stroke, heart attack and angina. Tapioca is a cholesterol free food and each cup of Tapioca flour provides 1.5 grams of fiber. The fiber content found in Tapioca accomplish daily requirement of fiber as it is essential to lower the blood cholesterol and prevent atherosclerosis.

Overweight and underweight is not good for the body. Those having lower BMI (Body Mass Index) than 18 are considered to be underweight and it are harmful for health. Researcher has shown that in comparison to overweight, being underweight is more harmful. It contains healthy amount of unsaturated fat and carbohydrates. Those who want to gain weight consume tapioca puddings. A cup of tapioca provides 45% of daily requirement of carbohydrate and as it does not have gluten or cholesterol, it is good for maintaining health. It is recommended for people those who want to lose weight after surgery, severe injuries or suffer from anorexia which is an eating disorder.

The daily intake of calcium keeps the bones healthy and strong. Besides strong bones, enough intake of calcium prevents the loss of bone mass or known to be osteoporosis. Research shows that calcium is losed by body through sweat, urine and feces. The loss of bone mass and calcium causes the possibilities of fractures which is called osteoporosis. Calcium should be obtained from food as the body won’t produce calcium or replace the calcium that has been lost.

Tapioca flour has potassium that is a vital mineral required for the human body. Potassium acts as vasodilator that is able to lower blood pressure as well as tension in the arteries. Potassium generates enlargement of blood vessel so that blood could be pumped slower. Tapioca flour balance blood pressure and also prevents from stroke and heart attack. It is low in sodium which makes it consumable by hypertension patients without worrying about raising blood pressure. Being low in cholesterol, it lowers the chances of heart diseases.

Tapioca has several nutrients which offer various health benefits to pregnant women. It contains folate which is a type if Vitamin B that is essential for formation of DNA of the baby inside womb and is also required for brain development. It is imperative for pregnant women to get enough folate as well as other nutrients to prevent birth defects such as neural tube defect or spina bifida in infant. 100 grams of Tapioca offers 6 milligrams of folate that fulfills 2% of daily requirement. Iron and folate prevents the deficiency of red blood cells or anemia.

Tapioca helps to prevent the deficiency of red blood cells as it is a great source of iron. The serving size of a cup of Tapioca helps to obtain 13% of daily requirement of iron. Iron is required for the formation of hemoglobin which is a protein in red blood cells which transfer oxygen to all the body parts such as organs and cells. The diet which lacks iron arises the chances of anemia and severe side effects such as fatigue, pain, short breath and chest pain. Besides iron, it contains iron that is essential for the production of red blood cells.

Consume tapioca if you want to gain energy and maintain stamina whole day. It is rich in carbohydrates which are regarded as the main source of energy. It boosts energy as the carbohydrates found in Tapioca are broken down faster and converted to energy. It does not have any cholesterol and saturated fat that is usually available in high energy food. It contains fiber that makes one full for longer time period and won’t make you feel hungry often.

Lot of things damage body from outside as well as inside. The cells are broken down every day and a component, protein, is there to repair and replace the loss. Protein is vital element for human body and it makes up all parts of the body. The protein repairs damage if consumed high protein food such as poultry, meat, milk and fish. Vegetarian people will surely look for the food based protein than animal based food. Protein helps to repair the damage of bodily cells, heal wound, develop muscle and other activities.

Tapioca is a perfect solution to have clear and youthful skin. It acts as a detoxifier which eliminates acne or scar that makes face ugly and dull. It promotes skin tone and also makes it bright. Use tapioca flour is as a facial mask twice a week. Mix two spoon of tapioca with one spoon of honey or also use egg yolk then combine it into paste. Apply it on face and leave for 15 minutes and then rinse with cold water. It is a great mask to eliminate freckles and dead skin cells that makes face rough.