Trending
You are at:Home»Nuts and seeds»Poppy seed benefits and nutrition 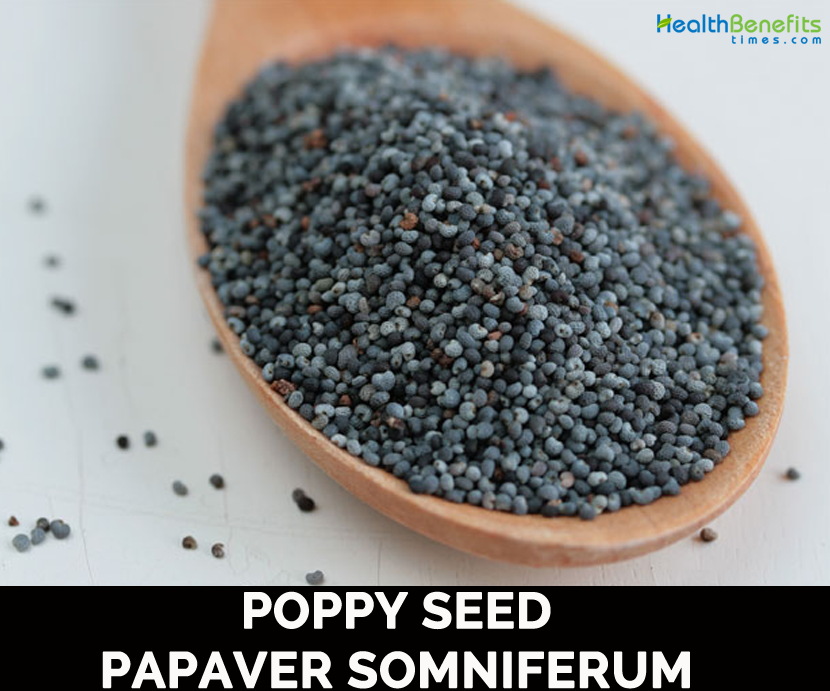 Poppy seed is an oilseed obtained from the opium poppy  (Papaver somniferum), an annual herbaceous plant in the Papaveraceae (poppy family) that originated in southeastern Europe and western Asia, and are now widely cultivated in Europe, Asia, China, and North Africa for their seeds, which are used in baking, as a condiment, and for their edible oil. It is also widely (and often illegally) cultivated for the production of opium, heroine, and morphine derived from the latex of the unripe fruit capsules. This species, along with numerous other Papaver species, are planted as an ornamental for its attractive flowers and foliage. Other popular common names of the plant are Bread seed Poppy, Edible-Seeded Poppy, Garden Poppy, Gear, Maw Seed, Medicinal Poppy, Oilseed Poppy, Opium Poppy, Poppy Seeds, Scag, Smack, Small Opium Poppy and White Poppy. Latin name of the opium poppy literally means “sleep bringing poppy”. Plant is named that way due to ability to induce sedation quickly after consumption.

The opium poppy is the only species of Papaveraceae that is an agricultural crop grown on a large scale. Other species, Papaver rhoeas and Papaver argemone, are important agricultural weeds, and may be mistaken for the crop. It is also valuable for ornamental purposes, and has been known as the “common garden poppy”, referencing all the group of poppy plants. Poppy seeds are considered an important food item and the source of poppy seed oil, healthy edible oil that has many uses. The seeds are used, whole or ground, as an ingredient in many foods especially in pastry and bread.  Up until now, some countries still ban the cultivation and the distribution of this crop.

Flowers are large, showy, 5–12 cm across, strongly cupulate, white, pinkish or reddish, rarely pale violet, with or without a basal dark blotch. Sepals are green caducous, 2–3.5 cm. Petals are twice as large as sepals, obovate- orbicular, with margin usually wavy or variously cut, caduceus. Stamens are numerous with white filaments and yellowish, oblong-linear anthers. Ovary are green, superior, spherical, 1–2 cm across, glabrous with 4–18 parietal placentas and many ovules and with 5–12 (−18) stigmas united into a compressed disk with deeply crenulate lobes. Fruit is a distinctive capsule, spherical or oblong, up to 4–6 cm in length and 3–4 cm in diameter, with small holes in the top. The capsule is green when it is forming and turns brown when mature and are crowned by stigmatic disk. Fruit consists of many, edible tiny, kidney-shaped seed that are globose to reinform, reticulate, deep gray to black colored. Though there is a white-seed cultivar from India. Average seed numbers per plant can range from 10,000 to 60,000. Poppy seeds are considered an important food item and the source of poppy seed oil, healthy edible oil that has many uses.

Opium poppy is generally supposed to have originated from Asia Minor but its exact place is unknown. Opium poppies are probably one of the earliest plants cultivated by men in Europe since the Neolithic era and represent one of mankind’s oldest medicinal plants. The plant has been domesticated by the Sumerians, Sumerian, Assyrians, Egyptians, Minoans, Greeks, Romans, Persians and Arabs. Over the centuries, however, it has been taken extensively into the Far East including India, Northern Burma and Thailand and China. Up until now, some countries still ban the cultivation and the distribution of this crop.

There are different varieties of poppy seeds. Some of the popular types are:

Poppy seeds have a wide range of benefits. They act as a cure for sleeplessness and mouth ulcers and enhance digestion. Poppy seeds even improve female fertility to a large extent and can also aid in cancer prevention.

Genes of opium poppies had shown promise in the development of a cancer drug. The drug called noscapine was found to fight tumors and even shrink the breast and prostate cancer cells. It can also stop cancer cell proliferation.

According to another Indian study, poppy seeds can increase the activity of a carcinogen-detoxifying enzyme called glutathione-S-transferase (GST) by as much as 78%. This activity of poppy seeds, as per the study, is high enough for the food to be considered potent for cancer treatment. Tincture of the poppy plant is said to treat cancerous ulcers.(1), (2), (3)

Consuming a poppy seed drink reduces the levels of cortisol in the body. This led to a calming effect as the stress levels eventually went down. More interestingly, the circadian rhythms in the test subjects showed a marked improvement. Also, the individuals felt less fatigued. Opium poppy is known to be particularly effective in inducing sleep. But exercise caution while giving it to kids. Consult your doctor before doing so. Simply take poppy seed tea before you go to bed to enjoy better sleep. Just make a paste of poppy seeds and mix it with warm milk. Take it before bedtime. One cup of poppy seed tea would do the trick. (4)

Poppy seeds are a wonderful source of dietary fiber, which helps in lower cholesterol levels and eventually improves heart health. As per a study, the cholesterol content in a food item decreased with a higher amount of poppy seed oil. This simply proves that including the oil to your diet can make it more heart-healthy.(5)

Poppy seeds consist of good amount of potassium, one mineral known to offer protection against and even treat kidney stones. However, according to research report, individuals with hyperoxaluria (an excessive urinary excretion of oxalate that increases the risk of calcium oxalate kidney stones) need to limit the amount of poppy seeds in their diet – as the seeds are high in oxalic acid.(6)

Since ancient times, the seeds have been used as an analgesic or to relieve pain. Even poppy tea (prepared by mixing the seeds in hot water) can offer analgesic benefits as per a health report. The analgesic effects of poppy seeds are especially powerful in the opium variety according to a report by Purdue University. (7), (8)

If you are suffering from constipation or diarrhea, you need fiber in your diet. Poppy seeds have a remarkably high level of dietary fiber, which can help to bulk up the stool or promote peristaltic motion to regulate your bowel movements. They have been directly linked to soothing inflammation and pain, thus promoting normal functioning in your gut.(9)

Zinc is one of the minerals the thyroid gland needs for optimal functioning. Poppy seeds can play a vital role in this aspect as they are rich in zinc. Also, iodinated poppy seed oil has been used in numerous parts of the world to treat iodine deficiency –the cause of thyroid dysfunction.(10)

As we age, our eyes naturally begin to fail us, but there are certain things we can do to stop this process. Antioxidant compounds are one great way to protect our eyes, but so is zinc, found in significant quantities in poppy, which can reduce the occurrence of macular degeneration and keep our vision strong.(11)

Research has shown that flushing the fallopian tubes with poppy seed oil can boost fertility. Researchers speculate that the oil can dissolve any debris or mucus in the tubes and increase the chances of fertility. The technique, also called hysterosalpingography, had 40 percent of infertile women in the test group achieve successful pregnancies. Not only had that, 29 percent of the infertile women in the group, who had their fallopian tubes infused with poppy seed water, attained successful pregnancies.(12)

Poppy seeds are effective in treating eczema due to their high content of linolenic acid. Poppy seeds, after being soaked in water or milk, can be ground along with lime juice to form a smooth paste. Applying this paste externally helps in treating burns and skin itchiness. It also acts as an effective painkiller by relieving the pain caused by skin inflammation.

As mentioned before, poppy seeds are high in fiber; they could be a preferred addition to a diabetic diet. And the manganese in the seeds might also aid in diabetes treatment. However, more research in essential for this aspect. Consult your doctor before you take poppy seeds for this purpose.

Poppy seed scrub can help cleanse your skin, making it look clear and blemish-free. You can prepare a face scrub by mixing 2 teaspoons of poppy seeds with curd. Rub the paste gently on clean face and neck in circular motions, massaging for 10 minutes. Wipe your face with a cotton ball and wash as usual. This will provide you with clear skin and a glowing complexion.

Poppy seeds are rich in calcium and copper. While the former improves bone health, the latter strengthens the bones as well as the connective tissue. Seeds are also rich in phosphorus, which, along with calcium, makes up part of the bone tissue. And the manganese in the seeds aids the production of collagen, a protein that defends your bones from severe damage.

Though there is limited research on this, anecdotal proof suggests that poppy seeds can help cure mouth ulcers. Poppy seeds are known to have a cooling effect on the body, which plays a role in mouth ulcer treatment. Simply mix some crushed dry coconut, powdered sugar candy, and ground poppy seeds. Shape it into a pellet and suck on this for instant relief from mouth ulcers.

Brain requires essential nutrients like calcium, iron, and copper – minerals that poppy seeds are rich in. These minerals aid in the regulation of neurotransmitters and enhance brain function. Poppy seeds might also cut the risk of cognitive disorder. However, further research is necessary in this aspect.

Poppy seeds consist of analgesic properties that can relieve various body pains effectively. Poppy seeds were widely consumed in the form of teas to alleviate pain and factors associated with it. If you encounter headaches frequently, you should try sipping on some warm tea made with it. However, don’t opt for a home remedy in case of a migraine and consult with your primary care physician in this regard.

Dandruff is a common problem which, if left untreated, can lead to hair loss. For treating dandruff, you can apply a mixture of soaked poppy seeds, hung curd, and a teaspoon of white pepper on the scalp. Leave the mixture on for half an hour and then rinse it off. Regular usage of this pack will considerably reduce the recurrence of dandruff.

You can rarely find foods that contain components to improve your psychological health. Poppy seeds are one of them as they are loaded with nutrients such as copper, iron, and calcium. When consumed regularly, the nutrients will regulate neurotransmitters that will improve cognition and concentration. Moreover, nutritionists recommend that consuming poppy seeds will delay the onset of age-related diseases like Alzheimer’s diseases and dementia.

Other Top Uses Of Poppy Seeds

Let us look at some of the best ways to use poppy seeds.

How to Buy Poppy Seeds