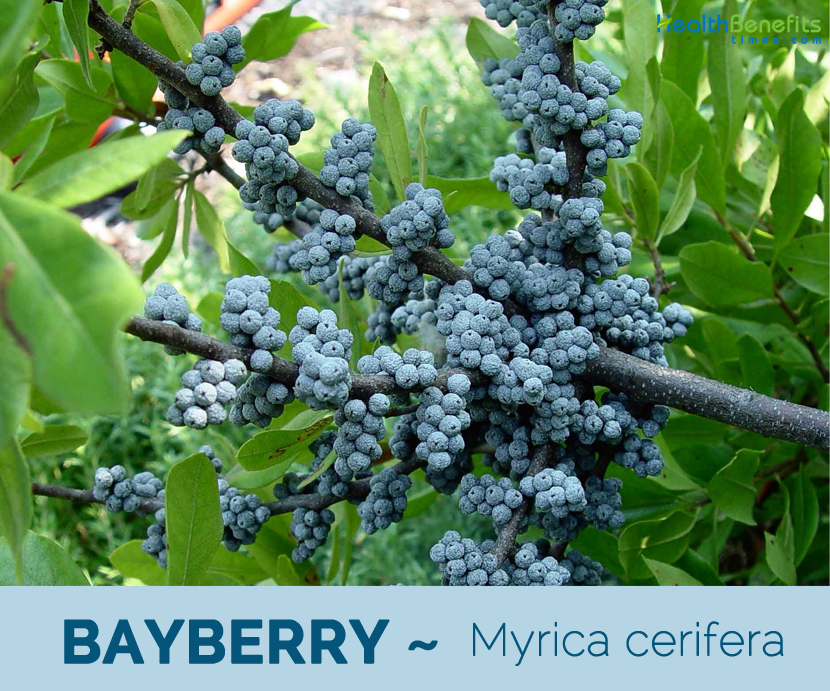 Myrica cerifera, commonly known as Bayberry, Wax Myrtle, Wild Cinnamon, Southern Bayberry, Wax Myrtle, Southern Wax Myrtle, Candle Berry, Arbre à suif, Myricae Cortex, Tallow Shrub, Wachsgagle, bay-rum tree, sweet gale, American Bayberry, Myrica, Vegetable Tallow, Vegetable Wax, Yang-mei, is a large, irregularly-shaped, dense-branching, nitrogen-fixing, suckering, fast-growing, evergreen shrub that typically grows to 9 meters (30 feet) in height. It is native to the low-elevation tropical, subtropical, and warm-temperate regions of the Americas. It is predominantly found in Africa, Asia, Europe, Eastern and Southern parts of the US.  It is typically found in a variety of habitats including wetlands, river margins, sand dunes, pine barrens, hillsides, and upland forests. The generic name was derived from the Greek word μυρικη (myrike), meaning fragrance. It is a part of the Myricaceae family of small trees and herbs that has more than fifty species. The herb was extensively used by Native Americans for medicinal purposes and for making candles. Traditionally, the herb also has been used as part of the folk medicine.

Bayberry is a large, irregularly-shaped, dense-branching, nitrogen-fixing, suckering, fast-growing, evergreen shrub that typically grows to 9 meters (30 feet) in height. The plant is found growing in sandy swamps, thickets, marshes and wet woodlands, river margins, sand dunes, pine barrens, hillsides, and upland forests. Bark is smooth and gray; covered with a thin, mottled layer; the cork beneath is smooth and of a red-brown color; fracture is reddish, granular and slightly fibrous. The plant’s roots have nodes containing nitrogen-fixing bacteria which form a symbiotic relationship with the plant allowing it to grow in very nutrient-poor soil.

Leaves are oblong to lance-shaped, 1-4 inches long, reduced at the tip of the branches, often sparingly toothed, dark green and shiny above, paler and sometimes hairy beneath; leathery, evergreen, with waxy globules and have a rather fragrant odor when crushed.

Flowers are unisexual, dioecious, and borne on catkin like axillary spikes. Flowering normally takes place from March to May. Fruits are small, light green, dry drupes which are covered with a conspicuous layer of pale blue wax, giving them a “warty” appearance. Each axillary spike bears 1 to 12 berries, which may persist over winter. They are green when young turning to blue-grey as they ripe. Traditionally, the herb also has been used as part of the folk medicine. During the 19th century, physicians used to treat cold, cough and flu symptoms using the bark of the bayberry. Hot tea made using powdered bark of bayberry was the most common form of treatment for cold and fever during those days. The root bark of the herb is collected during the fall and is then cleaned, separated, dried and powdered.

The early American colonists discovered the bayberry tree growing throughout the East, but they used it to make fragrant candles rather than medicines. In folk medicine, bayberry was used internally as a tea for its tonic and stimulant properties, and in the treatment of diarrhea, fever and dysentery.

Nineteenth century physicians recommended a hot tea of powdered bayberry tree bark at the first sign of a cold, cough, or flu.  Powdered root bark was an ingredient in what was known as “composition powder”, widely used for laryngitis, colds, flu, sinusitis and asthma. Though still available, it is however no longer in common use.

The health benefits of bayberry are primarily due to its astringent effects. These uses include the support of the digestive system and respiratory system as well as healthy inflammation management and menstrual health support. This herb has been popular for generations and can be used internal & externally. Listed below are few of the health benefits of Bayberry

Bayberry is quiet beneficial for the treatment of sinus problem. The herb helps in relieving some of the symptoms related with sinus like cold, flu, cough and over-reactive mucous membrane. Traditionally, the bayberry bark root is dried and used as a nasal astringent to shrink and contract the tissues in the sinus cavity and thus, to dry the secretions.

The sinus cavity in humans is located behind our eyes & nose. The cavity is nothing but an empty area for filtering air during breathing. During Sinus problems the cavity becomes inflamed & swollen, and this leads to excess mucous production. Sinus infection can cause tremendous pain and congestion all over the human face, neck and head.

Thus, bayberry as an herb can be used to treat sinus problems as it helps in shrinking the mucous membranes and does not allow fresh mucous formation. It is said that the herb effectively stimulates our circulatory system and forces the body to expel the mucous from the sinus cavity. Some also use the bayberry bark directly to the skin to relive sinus pain and congestion. Powdered bark root of this herbal shrub was and still is used to treat cold, flu, asthma and laryngitis.

Bayberry is used traditionally in the treatment of mouth and gums related problems. People use it as a gargle to treat sore throat and gum related problems like sensitive and bleeding gums. Today, many use bayberry bark root powder as toothpaste by mixing it along with cinnamon powder, echinacea root and salt.

Root bark of bayberry contains a very high concentration of tannins, which are constituents that promote the tightening of mucous membranes and help to protect against infection. Bayberry has been used traditionally as an anti-diarrheal medicine as it reduces the leaking of fluid into the digestive tract, and thus helps to prevent watery stools.

Due to its astringent and emetic properties of Bayberry it is used for treating digestion problems like indigestion, diarrhea, chronic gastritis, irritable bowel syndrome and bowel inflammation. As mentioned earlier, physicians in the 19th century used to make tea from this herb and treat problems related to digestion, especially diarrhea.

Bayberry supports the urinary system, bladder and kidney function, and can help lessen such symptoms as cramping, inflammation, irritation, and discomfort.  It is excellent for kidney stones and gallbladder problems.  It may optionally be used as a homeopathic component or an adjunct component.

Bayberry may be an effective treatment for diarrhea. Research have suggested that bayberry improves symptoms faster than antibiotics due to its astringent properties, but that antibiotics may be more effective at killing bacteria in the intestines. Because of the serious consequences associated with bacterial diarrhea, if bayberry is used to ease symptoms, it is best to take the herb along with standard antibiotic therapy. However, taking bayberry with antibiotics may reduce the effectiveness of antibiotics. Talk to your doctor before combining the two.

It is also said that the bark root powder of Bayberry can also be used to treat problems in females, such as heavy menstrual bleeding and vaginal discharge. It is usually used as a douche to treat vaginal discharge in women.

Herb was used to treat fever and infections especially related to the nasal passage in the past. It is said that the root of the herb has anti-biotic properties due to myricitrin, the chemical present in it. This herb was used by Choctaw Indians to treat fever.

Traditional uses and benefits of Bayberry

How to Make Bayberry Candles

Once you find a nice stand of bayberry bushes loaded with bayberries, simply strip the little berries off of their branches and into a bag, but be careful because spiders, wasps and other biting or stinging creepy-crawlies may be living among the berries. After you collect the quantity of berries that you need for the amount of bayberry wax that you want to make: