Trending
You are at:Home»Foods»What is Beef broth 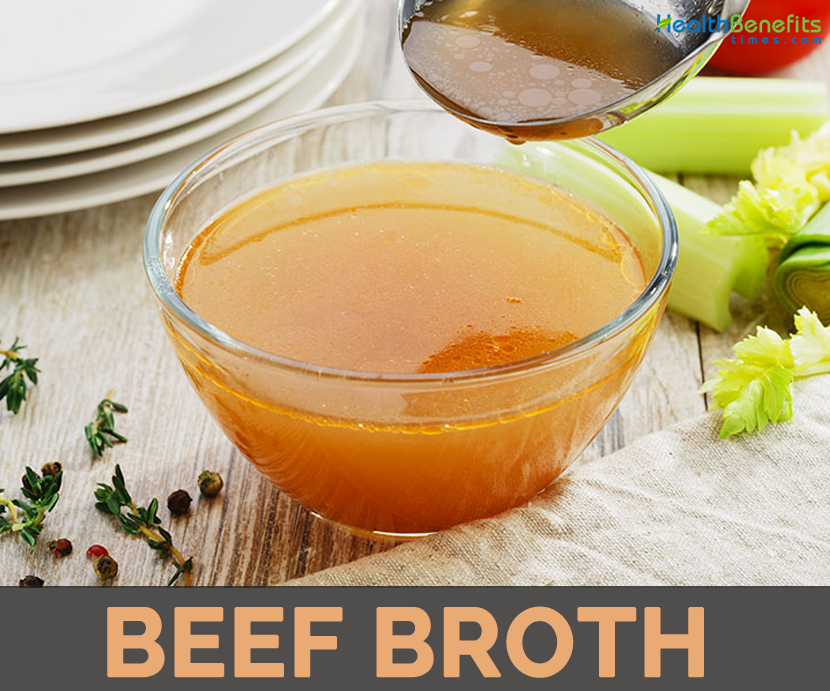 Beef broth is essentially a soup base made by boiling the bones of beef. It is typically made with bones and also contains a small amount of meat sticking to the bones. It’s then strained to separate the solids from the liquid. The liquid, often salted and seasoned, is the famous bone broth. It has been a staple in many diets around the world for a very long time. It allows us to use more of an animal, wasting less. It also contains many of the meat’s nutrients in an easy-to-digest liquid form. Commonly used in soups and cooking, beef broth provides you with some beneficial nutrients is low in calories and can make certain cuisine more edible. Because beef broth is high in sodium, however, use it in moderation to help reduce your risks for high blood pressure and heart disease.

Beef broth a healthful medicine that happens to taste good or you feel it’s more of a full-bodied stock that comes with some bonus health benefits, you’ll still agree that few dishes are as versatile, easy to make and cost-effective. Homemade beef broth’s full body works for most soups and sauces, while its mineral-rich nutrition profile helps your body work.

Beef broths are typically simmered for a very long period of time (often for 8 hours, and sometimes in excess of 24 hours), with the purpose being not only to produce gelatin from collagen-rich joints but also to release a small amount of trace minerals from bones.  At the end of cooking, the bones should smash when pressed lightly between your thumb and forefinger.

Beef broth was appreciated by traditional cultures because it’s packed with nutrients, easy to digest, rich in flavor, and loaded with restorative amino acids. It is chock-full of nutrients including a host of minerals and 17 different amino acids. Both of which are responsible for its rejuvenating effects. With all the nutrients found in beef broth, it makes perfect sense that it delivers some impressive health benefits. Listed below are few of the health benefits of beef broth

Beef broth is very low in calories, and can help you feel full. Thanks to its gelatin content, it also has the benefit of helping you feel more satisfied, which improves your weight loss efforts. Try making your favorite vegetable soup with beef broth in place of water or stock for a healthy, low calorie snack.(1)

Beef broth is one of the easiest foods to digest and is traditionally used when recovering from illness, especially digestive problems.  Just think of all the soups that are used as antidotes – in many Asian cultures they have congee, in Jewish culture there’s matzo ball soup, and Americans often turn to the classic chicken noodle.  Diets like the GAPS diet recognized this and put a strong focus on bone broths in order to heal the digestive system, mainly after the digestive lining has been damaged, like in Crohn’s Disease or Ulcerative Colitis.  High gelatin content of broth is considered mainly healing to wounds along the digestive tract. (2)

Beef broth when cooked with bones still has a good amount of joint tissue on them that tissue cooks down and dissolves into the broth.  Joint building blocks like gelatin and chondroitin sulfate (which are sold as expensive supplements to treat and prevent osteoarthritis) are readily available in bone broth, easily absorbed by our bodies and are rapidly used to rebuild and repair our connective tissue, which includes joints, tendons and ligaments.(3)

Another wonderful effect of gelatin present in beef broth is its ability to strengthen hair, skin and nails.  It is used topically for beauty treatments, but is even more effective when taken internally. (4)

Minerals dissolved in broth are essential for proper nerve function as they are used to conduct electrical signals from cell to cell.  Fats found in the broth are also essential to nerve health since many nerve cells (especially those in your brain and spinal cord) are covered in fat to help their signals travel faster. (5)

Inflammation is our body’s natural response to injury, but chronic inflammation can result in many disease conditions, including diabetes and arthritis. Beef broth can bring down inflammation since it has many anti-inflammatory amino acids. Among them, arginine deserves special mention because it is clinically used for treating widespread inflammation.(6)

7. Helps you Sleep and Contributes to a Calm Mind

Not sleeping well or not sleeping enough can lead to countless health conditions, and it can make you feel pretty unpleasant too. Bone broth might be able to help you out. Calcium and magnesium (both present in bone broth) have been found to alleviate insomnia.

Forget about chicken soup for the soul, bone broth is where it’s at. Glycine found in bone broth is often used as a supplement to promote a calm mind and restful sleep. Glycine is found in relatively small amounts in bone broth, so chances are it certainly won’t hurt to test this theory for you.(7)

Beef broth is also a great remedy for acute illnesses such as colds and flu. If you’re fighting a cold, make a warm bone broth soup that’s spicy with plenty of pepper. The spices will release watery fluids in your mouth, throat, and lungs, which will help thin the respiratory mucus so it’s easier to expel. Bone broth also contains a variety of valuable nutrients in a form your body can easily absorb and use — not to mention, it’s also great for when your appetite is weak from being sick.

Beef broth is traditionally given to children and the elderly to build up stamina and increase their resistance to infectious diseases. It is an outstanding tonic to keep you in good health during the flu season. You can add immunity-enhancing herbs like ginger, turmeric and astragalus to the broth to make it even better.

Osteocalcin is a hormone produced in bone cells. It has regulatory effect on the endocrine system which includes enhancing the function of pancreas as well as testes. It increases the secretion of insulin and the male hormone testosterone. Making beef broth a regular habit may help male fertility and virility.

Beef broth is quite wonderful for female reproductive health too, but gelatin plays a major role here. It is known to have a balancing effect on estrogen, down regulating its production whenever necessary. Uterine contractions are controlled by magnesium and calcium, and they prevent painful menstrual cramping.

Leg cramps are a common complaint of sports persons, but it is not rare among others. Some people experience these painful muscle spasms during and after energetic activities like swimming and running, while others get it during rest at night. Of the many causes of muscle cramps, depletion of minerals such as potassium, magnesium and calcium is the most prevalent.

Being rich in these minerals, especially calcium and magnesium, bone broth is an excellent sports drink to refill the electrolytes lost through perspiration. Drinking a cupful before and after a workout and before bedtime can protect you from painful cramps

How to Store Bone Broth

Bone broth can be stored in the refrigerator for no more than a week.  You can also freeze it in ice cube trays, and transfer the frozen cubes of broth to a reseal able freezer bag where they will keep for 6 months.