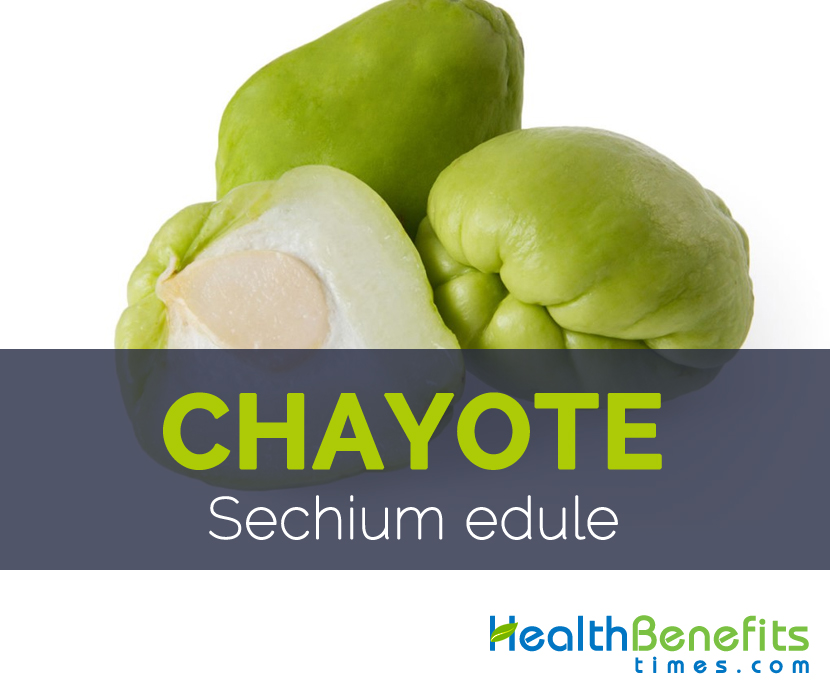 Chayote (pronounced chahy-oh-tee) scientifically known as Sechium edule, is the edible fruit of a tropical perennial vine plant which is a member of the Cucurbitaceae family, along with other squashes, gourds, cucumbers and melons. Light green, pear shaped fruit also known as Chaco, Choko, Chayote, Cho-Cho, Chayote Squash, Choco, Vegetable Pear, Custard Marrow and Madeira Marrow is originally native to Mexico but it has since been introduced worldwide. The whole vegetable is palatable — skin, roots, shoots, leaves, flower, flesh and seeds. It can be consumed raw or steamed, baked, stuffed, fried, marinated or boiled. Chayote de Caballo, Chayotillo, Cabeza de Chango are some common and popular varieties of Chayote.

It was ﬁrst domesticated by the Aztecs and Mayas in pre-Columbian times. This plant is a member of the Cucurbitaceae family and is mainly produced as a non-traditional export crop. Because of the wide diversity of chayote plants found in Mexico (predominantly the states of Veracruz, Puebla, Chiapas, and Oaxaca) and in Guatemala, this region is thought to be their geographic origin. Today, chayote is cultivated through tropical and subtropical regions of the world. The neutral ﬂavor and softness of chayote fruit make it particularly suitable for the food industries. Although chayote is mainly used for culinary purposes, the taste may vary depending on the strain and use. Additionally, the stems, leaves, and tuberous sections of the adventitious roots are also commonly consumed and are of nutritional relevance as food and feed.

Chayote is a perennial, monoecious climbing vine sized 12 meters or more when support is provided. It is found growing in cool climate, with full sun and moderate rainfall and prefers well-drained, moist, deep, fertile soil rich in organic matter however waterlogged, clayey soil or sandy soil must be avoided. At their natural habitat, mirlitons run along fences, over shrubs, and even on straight-up trees. In the cultivated farms, the crop is supported with strong trellis. It has thickened tuberous roots with brown skin and white inside. Stem are usually slender, branching, grooved angular stems and 3–5 fid tendrils. Leaves are 7 to 25 cm wide broadly ovate, angled, or slightly lobed and cordate (heart-shaped) at the base and apiculate (tapered) towards the apex. The petiole is 3 to 15 cm long. Leaves look like those of cucumber. Flower are small, greenish-white, unisexual, normally pentamerous, coaxillary and with ten nectaries in the form of a pore at the base of the calyx.  Axillary racemose inflorescences are 10–30 cm long, with patteliform calyx consisting of 5 triangular sepals, 5 triangular petals and 5 stamens.

Chayote is a roughly pear-shaped, slightly flattened and with rough wrinkles, ranging from 10 to 20 cm in length and 7–12 cm wide vegetable which weighs about 100-900 gram.  It has thin white and yellowish, or pale green to dark green or brown color skin and several shallow vertical furrows on the surface. Some varieties have spiky or fuzzy surface while others have smooth skin. Flesh is usually pale green to whitish colored. The flesh of the chayote is mild in flavor and has a texture somewhere between a potato and cucumber. It has a mild sweet taste that is similar to butternut squash or pumpkin. Seed is cream-white colored ovoid and compressed with a soft and smooth testa and often germinates within the fruit and has nutty flavor. Chayote is usually harvested from September through May. Almost all parts (seeds, roots, shoots, flowers, leaves and fruit) can be consumed raw, steamed, boiled, fried or even marinated to get healthy and delicious delicacies.

Chayote also known as Choko is found wild in the cool mountains of Central America exactly where it was first domesticated by the Aztecs. South Mexico and Guatemala are the center of greatest diversity of the cultivated chayote and the most likely center of origin for this ancient crop. Today, chayote is cultivated all through the tropical (highlands) as well as subtropical world for the edible fruits and tubers.

Chayote is a roughly pear-shaped, mild flavored vegetable grown worldwide for its delicious seeds, roots, shoots, flowers, leaves and fruit. Almost all parts are consumed raw in salad, boiled, marinated or fried.  It is a copper and vitamin B6 rich vegetable which is consumed worldwide to gain more benefits and remains healthy.

Chayote also known as Chaco, Choko is a perennial, monoecious climbing vine which is native to cool mountains of Central America. It prefers well-drained, deep, moist, fertile soil rich in organic matter. It is full of important nutrients like protein, dietary fiber, carbohydrate, vitamins like Vitamin B1, B2, B3, C, E and K and several mineral and amino acids which are extremely for our health.