Trending
You are at:Home»Fruits»Health benefits of Chinese Wolfberry 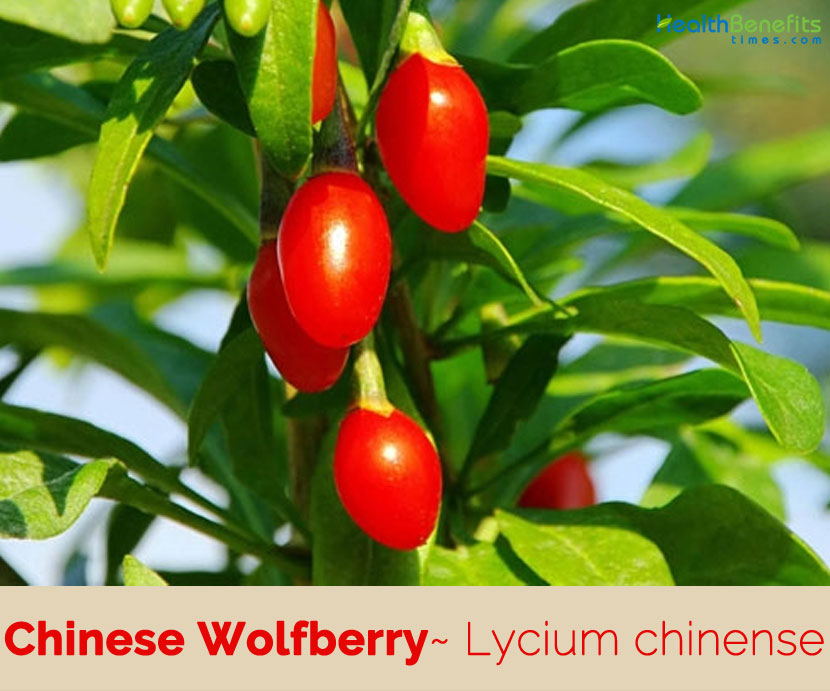 Genus name comes from the Greek name for a thorny tree from Lycia, a south-west region of Asia Minor that was used medicinally. Specific epithet means Chinese. Traditionally it is supposed to promote long life —a Chinese herbalist said to have lived for 252 years ascribed his longevity to tonic herbs, including lycium. Today both the berries and the root have a wide range of medicinal uses. The root can be unearthed at any time of the year but is most commonly harvested in spring. The berries are picked in late summer or early autumn.

Chinese wolfberry is a much-branched, erect, sprawling, deciduous, woody perennial shrub that normally grows about 1–3 meters (3 ft. 3 in–9 ft. 10 in) high. The plant is found growing in slopes, wastelands, saline places, roadsides, near houses, thickets, river banks in lowland, thickets in lowland, house backyards, old homestead sites, areas along railroads and vacant lots. The plant grows in moderately fertile, medium moisture and well-drained soils. Roots are woody and branching.  Root is known to stimulate the parasympathetic nervous system, which controls involuntary bodily functions. It also relaxes the artery muscles, thus lowering blood pressure. Chinese research has shown the root to have a prominent ability to reduce fever, and in one clinical trial it had a significant effect in reducing fever in malaria.

Woody stems and shoots are ascending, arching, or sprawling, and they occasionally climb over nearby vegetation and objects like a vine. Older woody stems tend to be brown, terete, and thorny, while younger woody stems are light brown with whitish streaks, terete or 4-angled, and either thorn less or thorny. Thorns are up to ½ inch long or slightly longer. Young green shoots are light green, terete or 4-angled, hairless, and usually thorn less. Leaves occur along the young shoots or young woody stems; primary leaves are alternate, but secondary leaves occur in clusters from the axils of older primary leaves.

Leaves form on the shoot either solitary in an alternating arrangement or in bundles of 2 to 4. Leaves may be ovate, rombic, lanceolate, or linear-lanceolate and toothless along their margins. They are usually 1.5–5 centimetres (0.59–1.97 in) long and 0.5–2.5 centimetres (0.20–0.98 in) wide (but up to 10 centimetres (3.9 in) long and 4 centimetres (1.6 in) wide in cultivated plants). Tips of these leaves are acute or blunt, while their bottoms taper into short petioles that are partially winged. Upper leaf surface is grayish green or medium green and hairless, while the lower leaf surface is pale grayish green or pale green and hairless.

Solitary or clusters of 2–3 flowers occur from the axils of leaves on hairless light green petioles 1–2 centimeters (0.39–0.79 in) long. Each flower is about ¾ inches long and similarly across, consisting of a bell-shaped (campanulate) light green calyx with 3–5 teeth, a lavender corolla with 5 spreading rounded lobes, 5 exserted stamens with brownish anthers, and an ovary with a single exserted white style that terminates in a swollen light green stigma. The base of each corolla is short tubular-funnel form; it is about the same length or a little shorter than its spreading lobes. The throat of the corolla and the interior of its lobes have dark pinnate and radiating veins, and sometimes the area around these veins is pale with light brown, yellowish, or greenish tints. Flowering normally takes place from June to August.

If a shrub is fertile, the majority of the flowers will be replaced by orange-red to red berries that are 7–15 millimetres (0.28–0.59 in) long and 5 to 8 mm wide (but up to 22 millimetres (0.87 in) long and 10 millimetres (0.39 in) wide in cultivation). Fruits are long, ovoid or oblong in shape, hairless, and shiny. The interior of these berries is reddish and juicy. Each berry consists of about 10–20 seeds, however their number may varies widely based on cultivar and fruit size, from 10 to 60.  Individual seeds are about 2.5 to 3 mm wide, orbicular-coiled in shape, somewhat flattened, and brownish yellow. The berries ripen from July to October in the Northern Hemisphere.

Berries (fresh or dried), young shoots and leaves are used in oriental cooking. Berries are used to make an herbal tea. Berries are dried for herbal use (China reportedly produces over 5 million kilograms of dried fruit per year). This is a long time medicinal plant (leaves, roots and berries) in China. 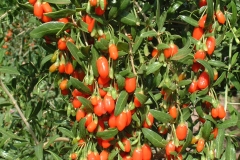 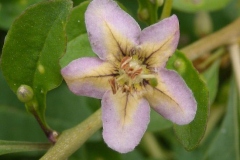 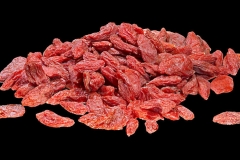 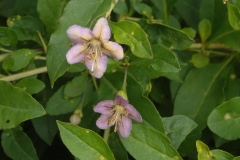 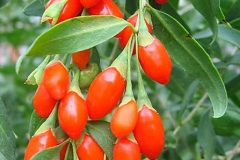 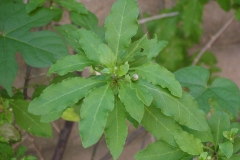 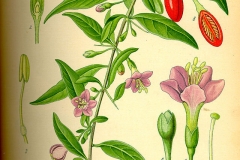 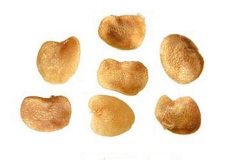 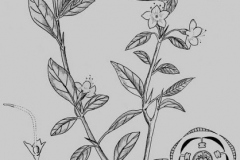 Chinese wolfberry tea is considered a wonderful immune booster because it consists of fructose, which is good sugar. Since white sugar is bad for us fructose helps the function of our immune system and helps to keep our bodies strong and healthy, and fights off disease. Apart from that fructose found in goji berry tea also boosts our energy and helps us be more productive and perform better athletically.

Smoking, high cholesterol, high blood pressure, high levels of sugar in the blood, and blood vessel inflammation are the main causes of heart disease. Chinese wolfberry tea has the ability to lower cholesterol up to 70% and also reduces triglycerides. It protects against LDL, bad cholesterol, and prevents it from oxidizing. Drinking wolfberry tea can also reduce blood sugar levels and because it has anti-inflammatory properties, it can also reduce inflammation. All of that significantly lowers the risk of heart disease, making wolfberry tea an amazing natural medicine.

Testosterone is a male sex hormone which has an important role in the male reproductive system. Chinese wolfberry tea helps to increases the levels of testosterone in a man’s body and thus increases the sperm count. It can also be very simulative for sexual desire and increases sexual performance. Chinese berries are a known aphrodisiac and have been used for hundreds of years in China. (+)

Chinese wolfberry tea can protect you from cancer in several ways. First of all, wolfberry tea is an anti-oxidant which means it can prevent the oxidation of cells and decrease the risk of cancer. It also fights free radicals and prevents DNA damage that can be caused by them. And as it has already been said, wolfberry tea boosts the immune system which can also help to keep cancer away. (+)

Glutathione is produced naturally by our liver and it is very important for our health. It is used for treating and preventing alcoholism, liver disease, heart disease, high cholesterol, among many others, and it also boosts the immune system. Chinese wolfberry tea can restore glutathione and keep the liver healthy.

Chinese wolfberry tea is wonderful for detoxification and it is recommended to drink it in order to get rid of all the dangerous toxins from your body. Liver plays the key role in detoxing and Chinese wolfberry tea can greatly help that process. Doing this kind of liver cleanse can be very beneficial for your health and the health of the liver.

Wolfberry tea is known to considerably improve mood and increase the sense of wellbeing. Stress and anxiety are very detrimental for our mind and body, and can lead to depression and other dangerous conditions which prevent us from leading a normal, happy life. Drinking Chinese wolfberry tea gets rid of stress and anxiety and can also help with fatigue, giving you a needed energy boost.

Chinese wolfberry tea consists of wonderful amount of beta carotene. Beta carotene slows down the skin aging process and decreases skin damage from UV light. It also reduces sensitivity to the sun which is perfect for people who have sensitive skin and are susceptible to sunburns. Beta carotene creates a natural glow and thus makes your skin look more beautiful and younger. (+)

Chinese wolfberry tea is very high in dietary fibers that can make you feel full for a longer time after you’ve had a meal. As the result of that, you will eat less and lose weight quicker. Drinking wolfberry tea also aids in quicker digestion which also encourages weight loss and helps with any kind of indigestion problems.

Wolfberry fruits have traditionally been used in China to improve vision disorders such as cataracts, retinopathy and macular degeneration. Research have shown that Chinese wolfberry reduce dark adapting time and improve vision under subdued light. This action may be attributed to the phytochemicals lutein and zeaxanthin, which neutralizes the free radicals formed by sunlight.

Lycium root is used in China to “cool the blood,” helping to reduce fever, sweating, irritability, and thirst. These cooling qualities also help to stop nosebleeds, reduce vomiting of blood, and soothe coughs and wheezing, whenever they are due to “patterns of excess heat.” Blood pressure As a result of recent research, lycium root is beginning to be used in China to treat people suffering from high blood pressure.