Trending
You are at:Home»Herbs and Spices»Horny goat weed (Barrenwort) facts and benefits 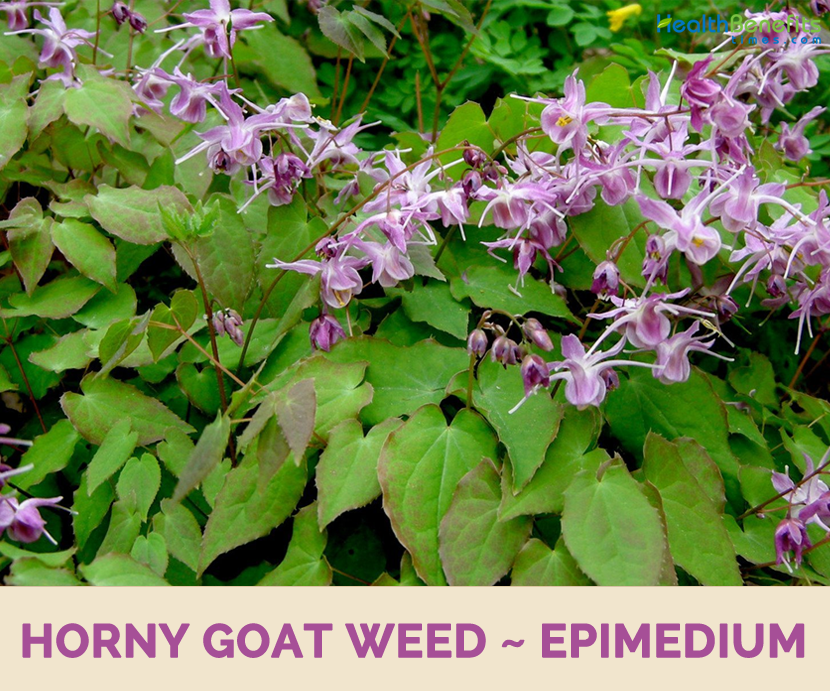 Leaves are both basal and cauline and can either be biternate or triternate. Narrow ovate to broad ovate leaflets (to 2-4” long) have spiny-toothed margins, cordate bases and acuminate to acute tips. New leaves emerge in spring with beige to bronze cast but quickly mature to medium green.

Individual flowers are divided into 4 parts with 4 smaller sepals outwardly. These are greenish in color and shed as the flower opens. On the inside, there are 4 large petal-like sepals which are mostly brightly colored. Inside these sepals are the true petals of the flower. They have a complex shape along with a ‘spur’ which produces nectar. This spur is longer than the sepals and the flower has 4 stamens. A particular genus called the ‘bishop’s hat’ has a peculiar shape of the flowers with the spurs longer than the petals.

Research has discovered that regular consumption of this herb is able to improve mineral uptake and lower the risk of osteoporosis. By increasing bone mineral density and preventing the leakage of minerals by the body, this herb can keep you strong and flexible as you age.(2)

Perhaps the most famous use of this herb, it is able to regulate the levels of stress hormones in the body, which can prevent symptoms of low sex drive and menopause. Additionally, the antioxidants present in this herb can dilate the blood vessels and increase circulation. This means that proper blood flow to sensitive reproductive areas will be increased, thus alleviating the symptoms of erectile dysfunction in some men.(3)

With antioxidant properties in this potent herb, supplementation can aid in preventing many different chronic diseases, such as cancer, rheumatoid arthritis, and coronary heart diseases. Antioxidants can eliminate free radicals in the body before they can cause cellular mutation.(4)

Research has demonstrated that icariin, among other active phytochemicals in epimedium, may prevent bone loss in postmenopausal women. One research found a significant difference in bone health between groups of women taking an epimedium supplement than the group taking placebo.

Traditional Chinese medicine often make use of epimedium as a natural therapy for joint discomfort — a condition that can negatively affect a person’s quality of life and be a huge, constant energy drain. Mainstream research has been a little slow in reviewing the traditional use of the herb, but so far animal models support the traditional application against the condition.

Research carried out in China has shown that Epimedium can be helpful in alleviating airway inflammation by decreasing the activities of some proteins that are responsible for the production of leukocytes in inflammatory areas in the lung, thus helping with controlling the effects of asthma.

It is possible to have allergic reactions to this herb, such as nausea, dizziness, and vomiting, particularly if taken in large amounts. Additionally, drug interactions are possible, so any use of this herb should be discussed with your doctor first.