Facts and Food Sources of Chlorophyll 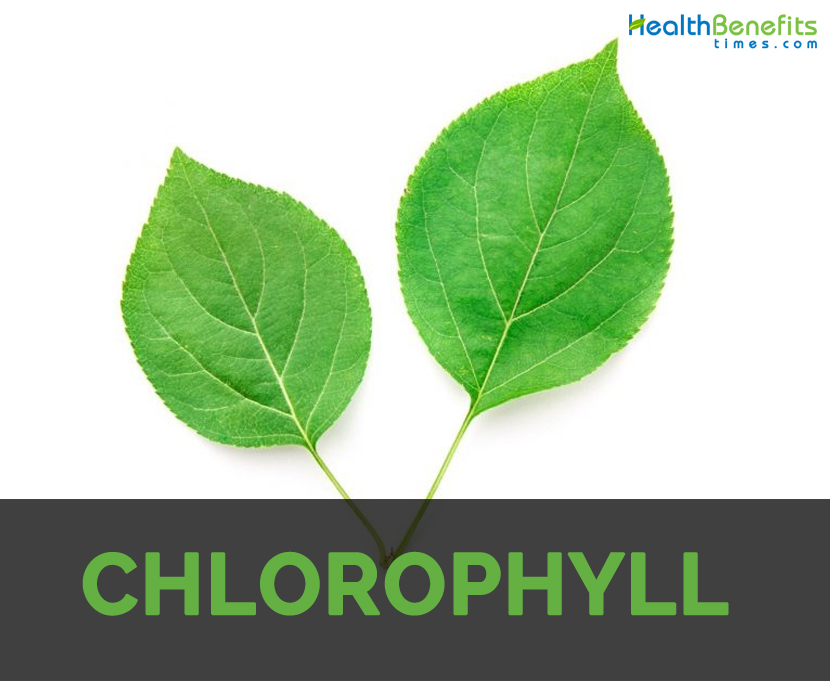 Chlorophyll is a green pigment of plant which captures energy from sunlight for photosynthesis. This pigment is found in all green vegetables such as spinach and green beans. Plants get its green color from chlorophyll. Chlorophyll is used with sunlight by plants to obtain nutrients. It is found in all photosynthetic organisms such as green plants, eukaryotic algae and prokaryotic blue-green algae. The name has been derived from Greek words χλωρός, chloros which means green and φύλλον, phyllon which means leaf. Chlorophyll absorb light strongly in blue portion of electromagnetic spectrum and red portion. But it is a low absorber of green and near green portions of spectrum which is reflected by forming green color of chlorophyll containing tissues.

There are two types of chlorophyll in photosystems of green plants such as chlorophyll a and b. Chlorophyll c and d exist in different algae and chlorophyll e is a rare one available in some golden algae. Chlorophyll in green plants occurs in membranous disklike units in organelles known as chloroplasts. Chlorophyll molecule inhere a central magnesium atom which is surrounded by nitrogen containing structure known as porphyrin ring which is attached to the ring, a long carbon-hydrogen side chain called phytol chain. Variations occur because of minor modifications of some side groups. It has similar structure to hemoglobin i.e. an oxygen carrying pigment found in red blood cells of mammals and other vertebrates.

This green pigment found in plants helps to facilitate absorption of light from sun. It is capable of converting light energy into usable form which could be used for various processes such as photosynthesis as a result of which green plants form their own food. Plant cell stores sunshine and makes it available for consumption.

Chlorophyll is also available in form of pills, drops and capsules. Most of its supplements contain chlorophyllin which is a water soluble derivative of natural chlorophyll which is absorbed by the body than other forms of chlorophyll.

Firstly, chlorophyll was isolated and named by Joseph BIeniame Caventou and Pierre Joseph Pelletier in 1817. In 1906, presence of magnesium in chlorophyll was discovered. It was the first time, magnesium is disclosed in living tissue.

From 1905 to 1915, after initial work conducted by Richard Willstatter, a German chemist, the general structure of chlorophyll a was exemplified in 1940 by Hans Fischer. Stereochemistry of chlorophyll a was known by 1960, a total synthesis of molecule was published by Robert Burns Woodward. Ian Fleming completed elucidation of stereochemical in 1967 and in 1990 Woodward and co-authors published an updated synthesis. In 2010, chlorophyll f was found in cyanobacteria and other oxygenic microorganisms which form stromatolites.

Listed below are the dietary sources of Chlorophyll:

Let’s take a look on health benefits of Chlorophyll:

Chlorophyll lowers the chances of cancer development and also cleanses liver by interfering with metabolism of chemicals procarcinogen which should be metabolized for damaging DNA. Diet rich in meat and low in green vegetables are related with promoting colon cancer. Research has shown that human cancer cells experience cell arrest when disclosed to chlorophyllin because of inhibition of ribonucleotide reductase activity.

Chlorophyllin slows down the rate at which harmful bacteria reproduce which makes it beneficial for healing wounds and prevent infections. In 1940s, chlorophyllin are added to some ointments that helps to heal persistent open wounds in humans such as pressure ulcer. It helps to reduce inflammation caused by wounds or injuries, promotes healing and control odors caused by accumulation of bacteria.

Chlorophyll promotes detoxification by speeding elimination of waste, balancing fluid levels and lowering chances of constipation. Research has shown benefits of chlorophyll and promotes likelihood of success of weight loss. Study shows that supplements of chlorophyll when taken with high carbohydrate meal lowers feeling of hunger, prevent hypoglycemia and elevated cholecystokinin levels in overweight women. Research shows that chlorophyll when taken in form of thylakoid supplements helps to balance hormones release making us to feel full including ghrelin, cholecystokinin and insulin.

Chlorophyll is beneficial to skin health as it possess antiviral properties allowing to halt development of cold sores within mouth and genital area caused by herpes simplex virus. Study shows that with an application of chlorophyll containing cream or ointment, it helps to lower sores that appear and speeds up healing time making it a cure for herpes. It protects skin from shingles by lowering the symptoms such as painful sores and also lowering the chances of skin cancer. Applying lotion containing chlorophyll lowers recurrence of cancerous cells in people having basal cell carcinoma which is a common type of skin cancer.

Chlorophyll helps to restore and replenish red blood cells. It is found in live enzymes that assist cleansing blood and promotes its ability to carry more oxygen. It builds blood and helpful for anemia caused due to the deficiency of red blood cells in the body.

Study shows that anti-inflammatory properties found in chlorophyll are beneficial for treating arthritis. Chlorophyll and its derivatives halt formation of bacterial induced inflammation. It is an effective ingredient in preparing phytomedicines for curing painful medications such as arthritis and fibromyalgia.

Chlorophyll has purifying properties that assist in detoxification of the body. Chlorophyll assists in healthy flow of blood as well as oxygen in the body. It helps to eliminate harmful toxins and impurities. It forms complexes with mutagens and is able to bind or flush out toxic chemicals or heavy metals such as mercury from the body. It detoxifies liver and revives it. It effectively lowers harmful effects of radiations and assists elimination of pesticides or drug deposits from the body.

Chlorophyll enhances healthy digestion by maintaining intestinal flora and vitalizing bowel movements. It operates as a natural drug to intestinal tract and assist in renewing wounded bowel tissues. Diet low in green vegetables and high in red meat enhances the chances of colon problems. It promotes cleansing of colon by inhibiting cytotoxicity prompt by dietary heme and preventing proliferation of colonocytes. It is helpful in treating constipation and alleviating discomfort caused by gas.

It supports strengthening of cell walls as well as overall immune system of the body by attributing alkaline properties. Anaerobic bacteria promote development of diseases and could not survive in alkaline environment offered. It is an oxygenator that promotes ability of the body to counteract diseases, accelerate healing process and boost energy levels.

Besides its regular intake, chlorophyll and its derivative chlorophyllin is served as a food additive and used for providing green color to various foods and beverages.