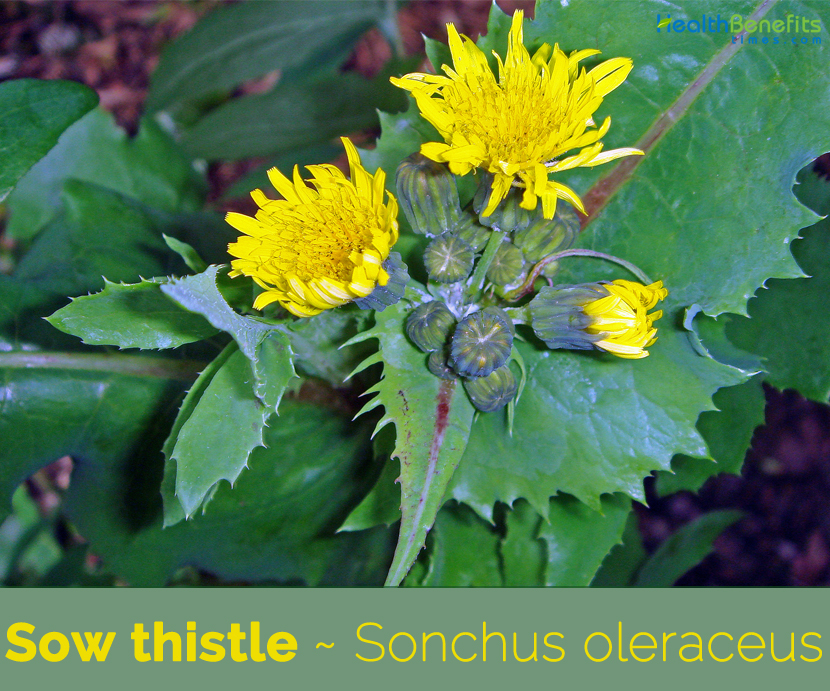 The name of the genus, Sonchus, is derived from the Greek word for hollow, and bears allusion to the hollow nature of the succulent stems, while oleraceus refers to its good taste. The Sow Thistles are sometimes mistakenly called Milk Thistles from the milky juice they contain; the true Milk Thistle is, however, a very different plant. Apart from that the common name sow thistle refers to its attractiveness to swine, and the similarity of the leaf to younger thistle plants. The common name hare’s thistle refers to its purported beneficial effects on hare and rabbits. It is a nutritious plant that contains several minerals (calcium, magnesium, iron, phosphorus, sodium, potassium and zinc) and vitamins (A, B1, B2, B3, B6, & C). The leaves are also great to use as an antioxidant.

Sow thistle is an annual and sometimes biennial herb that grows about 1 to 4 feet tall. The plant is found growing in fields, orchards, roadsides, gardens, waste areas, forests, grassland, riparian habitats, freshwater wetlands, coastal estuaries, dunes, pastures, open disturbed areas in cultivated land, near waterways, burned areas, construction sites, rail yards, edges of yards, vacant lots and areas adjacent to buildings. The plant mostly grows on humus-rich, chalky, mild soils well-supplied with nutrients. The plant has deep tap root system which is upright with many branches. Stem is erect, 5 angled, that are 60 – 150 cm high, smooth and hairless on the lower part but glandular-hairy towards the top and on branches, hollow, thick, branched stems full of milky juice. They are dark green in color (sometimes tinted with a reddish-purple tinge).

Leaves are lanceolate to oblanceolate in shape, hairless and dark green in color with pale white to purple veins. The first leaves are round with a slightly toothed margin with a few spines. They have sparse hairs on the upper leaf surface. The mature leaves are thin, soft and dark-green in color with irregularly-toothed margins ending in small, soft spines. The upper leaves are smaller than the lower leaves, stalk less and clasp the stems with claw like basal lobes. Leaves are thin and soft, measuring up to 36 cm long and 12 cm wide.

Flower heads are yellow and are 5-6 mm in diameter and are borne on stalks at the ends of branches, in an irregular terminal panicle (a compound inflorescence with a main axis and lateral branches which are further branched, and in which each axis ends in a flower or bud), with or without hairs. Flowers tend to open primarily between the hours of 6 am till 11 am. The floral bracts at the base of the flower head are dull green, hairless and overlap each other in a vertical series. Flowering normally takes place from June to August.

Fertile flowers are followed by an achene (a dry indehiscent, non-opening, 1-seeded fruit) that is 2.5-4 mm long and 1mm wide, brown, 3-ribbed on each face, wrinkled with narrow margins and compressed and obovoid in shape. The seeds are light with white parachutes of silky hairs (pappus), the silky hairs being 5-8 mm long.

The species of this genus has been probably consumed since ancient times. Dioscorides in the first century, mentioned two kinds of sónkhos, one more rough and prickly, the other more tender and edible (Laguna 1555), probably Sonchus asper and S. oleraceus (Osbaldeston 2000). 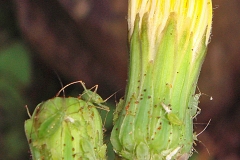 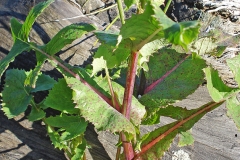 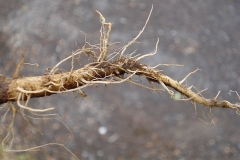 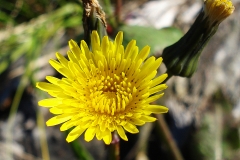 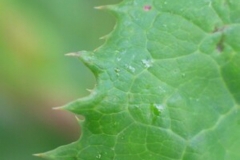 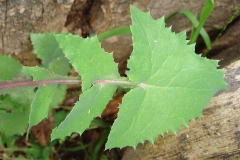 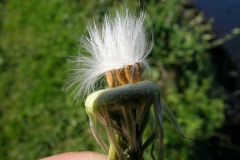 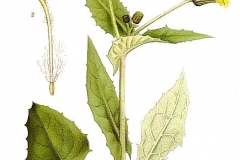 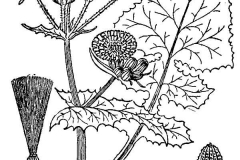 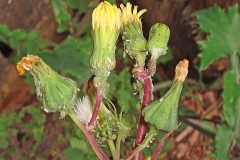 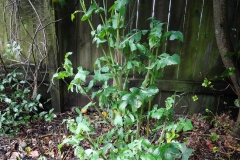 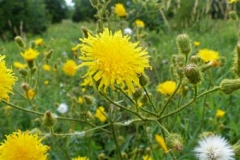 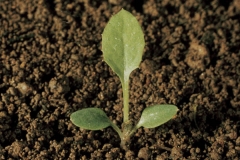 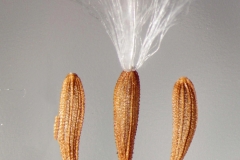 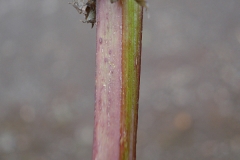 Eradication of Sow thistle plants from ruderal spots close to farm crops before flowering will prevent the achene spreading by means of wind. Cultivated plant seeds must be clean and of a good quality and seeding must ensure optimum plant density. Crop rotations must be complied with, as well as suitable timing for summer and autumn ploughing. Hoeing must be carried out as often as needed, so that sow-thistle plants do not reach the flowering stage.

Young plants are easy to pull out and the tap roots will come with them, but as the plants get older and more firmly rooted, they cannot be pulled out without breaking off the stems, which will then regrow.

Plants which are cut off above soil level recover quickly. Hutchinson et al. (1984) recommended repeated autumn tillage in milder Canadian climates, or in spring after spring emergence of seedlings. Plants do not regrow from root fragments. However, deep burial of the seeds prolongs their survival.

Wide range of herbicides is being used to control Sow thistle either pre- or post-emergence in different crops. However the species has now developed resistance to ALS-inhibiting herbicides such as chlorsulfuron and metsulfuron-methyl in Australia. Widderick and Walker provide advice on appropriate herbicides for its control in wheat, how to manage the weed in Queensland and Northern New South Wales, and how to avoid further development and spread of herbicide resistance, including the dreadful prospect of glyphosate resistance.

Cattle and sheep readily graze the plants, one of the reasons for its lack of persistence in pastures.