Trending
You are at:Home»Foods»What exactly is Black Pudding? 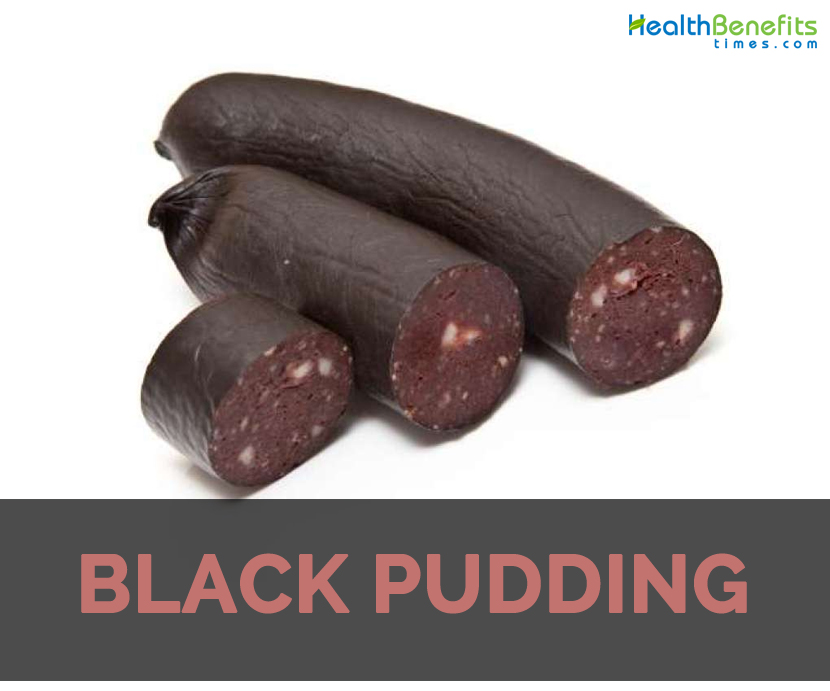 Black pudding is a blood sausage which originates in Ireland and Great Britain. Usually it is made from pork blood, beef suet or pork fat, cereal usually oat groats, oatmeal and barley groats. Cereal in high proportion with use of certain herbs such as pennyroyal distinguishes black pudding from blood sausages consumed in other parts of world. Blood sausage is known as Black Pudding in Great Britain. German blutwurst is made from beef blood, fatty pork meat and filler such as barley.

It is prepared by mixing blood with oatmeal and fat before being packed in casing. Then sausage is served boiled, grilled or fried and cut into rounds or is crumbled into small pieces. The traditional British black pudding is similar to blood sausages which are served across the world. The addition of spices and seasonings may vary. The traditional recipe of Black pudding consists of pork fat, onions, spice flavorings, oatmeal and pig’s blood. Sometimes the pork fat is substituted by beef suet or oatmeal is replaced with barley and pig’s blood with beef blood.

Virtually every culture that reveres the pig has found a way to turn the perishable blood of porcine sacrifices into an edible delicacy—be they French (boudin), British (black pudding), Polish (kiszka), German (blutwurst), Italian (biroldo), Portuguese (morcela), or any other. Most of the time, that means finding a way to lace the blood with fragrant fillings of onions, seasonings, and a binding agent of some kind (potatoes, rice, flours, and cereals are the most common) before cooking or drying the mixture and hanging the sausage up for safekeeping in the winter larder. Spanish morcillas are almost always made in one of two ways: either with rice and/or other starchy binding agents or with a ton of onions as a sort of loose binder.

Most Spaniards, however, love it, which is why Morcilla de Cebolla is the go-to blood sausage in Spain. It’s deployed in various guises all over the country for everything from cocidos and other stews; paired alongside all sorts of legumes; or used as part of the sofrito for sautéed/stewed/simmered/sexified vegetables. Just know that, yes, this seems like an absolutely ridiculous amount of onions. But remember that onions and blood are the only binding agents for this sausage, and once the onions are cooked, more than half their weight and volume will evaporate.

It is considered to be the oldest form of sausage. Generally animals are slaughtered and blood is prepared as pudding which ensures that it does not get waste. Mostly the recipe of black pudding includes pork blood or cow blood or sheep blood. In 15th century English recipe, the pudding used porpoise which was consumed exclusively by nobility. In Scotland for at least 19th century, the blood of cow or sheep was used for black puddings. Jamieson’s Scottish dictionary referred black pudding as a pudding which is made from blood of cow or sheep. The consumption of black puddings is associated with Martinmas when annual slaughter of livestock shows up. In 19th century, the manufacture of black pudding was associated with towns which are known for large markets for pork such as Stretford then in Cork, Lancashire or Ireland.

Most of the traditional recipes from United Kingdom include stirring fresh blood, addition of fat, rusk and seasoning before the mixture is filled into casing and boiling it. The natural casings of beef intestine were being used formerly but commercially made puddings used synthetic cellulose skins which are produced from imported dried blood. Typically, the use of limited ingredients and barley or oats is used to thicken and absorb blood in black pudding if compared to Continental blood sausages. But also the recipes of black pudding show variations across country. Flour or breadcrumbs are used to supplement barley or oats and the texture and proportion of fat or suet could be used widely. The traditional flavorings include marjoram, pennyroyal, mint and thyme. In North Riding of Yorkshire, pennyroyal is known as pudding yerb due to its use in black puddings. Sometimes other herbs and spices are used such as rue, cumin and parsley in traditional black puddings.

The dish is known as black pudding for centuries and various names have been used for the dish such as black pot or bloody pot in reference to being cooked in earthenware pot rather than sausage casing.

How to make Black Pudding? 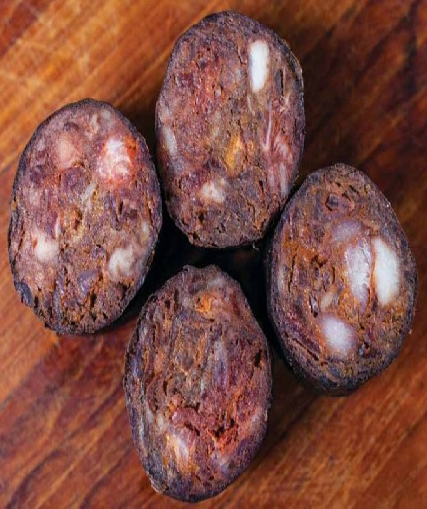 2–4 loops of sausage per