Trending
You are at:Home»Vegetables»Traditional uses and benefits of Chinese Yam 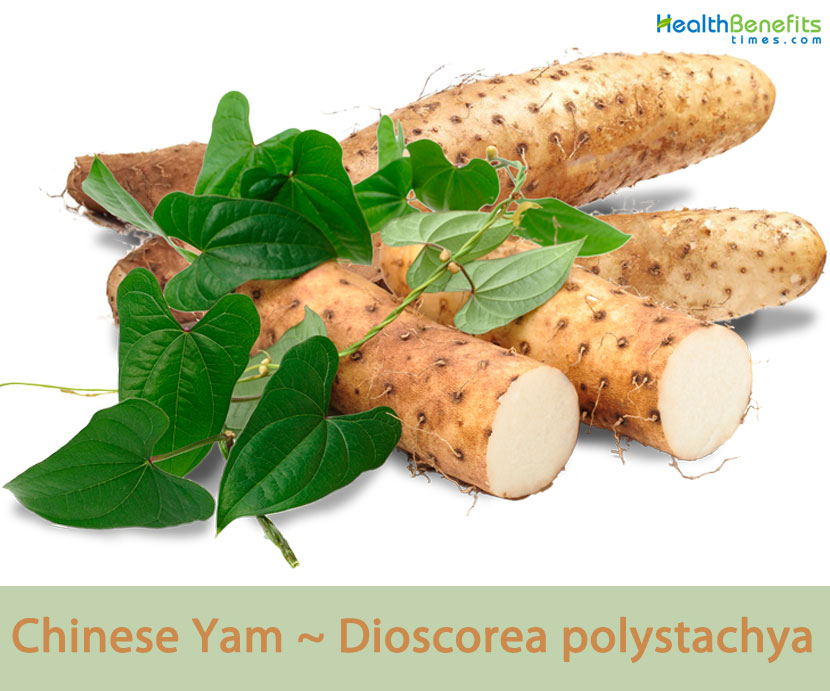 Chinese yam and cinnamon vine are frequently used common names for D. polystachya. Chinese yam refers to its origin from China where the tuber was regularly eaten for starch. The name cinnamon vine is attributed to the cinnamon-like fragrance of D. polystachya flowers. This cinnamon fragrance and showy flowers also contribute to D. polystachya’s attractiveness for horticultural use. The genus name “Dioscorea” is from Dioscoride, in honor of Greek pharmacologist and botanist Pedanius Dioscorides. Polystachya comes from Greek poly & stachys: having many spikes. The edible tubers are cultivated largely in Asia and sometimes used in alternative medicine. This species of yam is unique as the tubers can be eaten raw. People in China eat the roots as a mild tonic food, along with other yams. Japanese people call it nagaimo, which translates to long yam.

Leaves are usually arranged oppositely, although they may be alternate in the upper nodes, and are occasionally arranged ternately in whorls of 3. Leaves are simple, 7 to 9-nerved (veined), 4 to 8 cm (1.5 to 3 inches) long, and are typically ovate, hastate, or sagittate in shape. Leaves generally have a deeply lobed base, an acuminate tip, and are reddish-purple colored along the leaf margins, petioles, and stems. New leaves often display a distinctive bronze-colored tint.

The staminate plants may produce small, yellowish-white flowers annually. The flowers are unisexual (plants dioecious) and arise from the leaf axils in spike or paniculate inflorescences. The perianth is bell-shaped and the staminate (male) flowers are in bundles, spikes or panicles at the end of the branches. The plant may have a spicy fragrance similar to cinnamon. Arrangement may be paniculate or spicate. Flowering normally takes place in between September to October.

Fertile flowers are followed by membranous, three angled capsules.  Seeds are winged all around, but the chief means of reproduction are aerial, potato-like tubers (bulbils) located at the leaf axils and underground tubers. 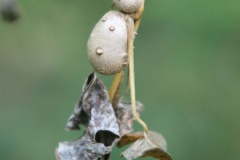 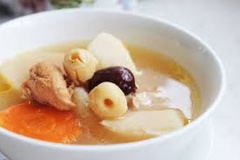 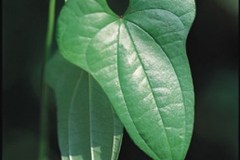 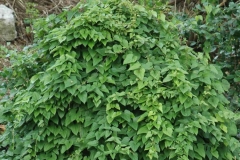 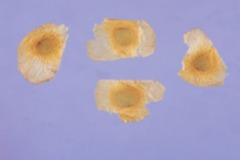 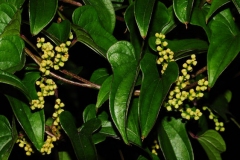 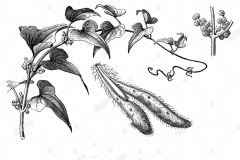 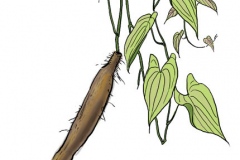 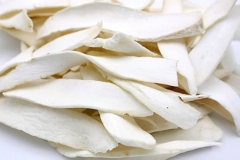 Polysaccharides found abundantly in Chinese yam helps to decrease blood sugar. In the meantime, diosgenin increased insulin sensitivity (by binding to PPAR gamma). Chinese yam may be a good functional food for diabetes or pre-diabetes.

Chinese yam may increase progesterone and estrogen levels, according to studies in menopausal rats. In lab settings, it also activated the enzyme aromatase, which makes estrogen. In rodents, it increases the response to the pituitary’s FSH, which along with LH orchestrates the activity of female sex hormones in the body.

In one remarkable case study, a traditional tonic including Chinese yam, rehmannia, epimedium, and other herbs, may have restored fertility in a woman with ovarian failure. However, this was only a single case which has not been repeated in clinical settings. It should not be used as grounds to take Chinese yam for fertility.

Mucilage has traditionally been used to soften the skin and manage skin disorders. Mucilage from a variety of plant sources promotes wound healing and soothes rashes and burns. Chinese yam is rich in mucilage; if ground or grated and spread on the skin; it may help heal cuts, scrapes, and other conditions.

According to animal and cell studies, Chinese yam and its extracts may promote the growth of healthy bacteria in the digestive system. Eating Chinese yam increased beneficial Lactobacillus bacteria, blocked the ulcer-causing E. coli, and decreased gut inflammation in mice and rats.

It is common in traditional Chinese medicine to mix herbs to treat specific sets of symptoms. Chinese yam may be combined with the following to treat certain symptoms as shown:

As with all prolific invaders, the key to the successful control of D. polystachya is to prevent new infestations or to control them as soon as possible. Especially since D. polystachya appears to have a limited range of dispersal, be aware of any new infestations that might arise from nearby planted vines. Dioscorea polystachya has a wide range of environmental adaptability and few pests and predators in North America. It has a high degree of asexual reproductive vigor, and is difficult to manage once firmly established. If controlled during the early stages of invasion, the potential for successful management is high. The potential for large-scale restoration of wild lands where D. polystachya has become established is probably moderate.

Although there is not much conclusive evidence on how best to manage D. polystachya in wild lands, control efforts for this species may be similar to those used for Dioscorea bulbifera (air-potato), another highly invasive non-native plant to North America from the same genus. Currently, the best control of D. polystachya will likely occur with the use of an integrated management approach. The use of manual and mechanical methods followed by another control technique (for example, periodic herbicide sprays to control for new bulbil recruitment and root sprouts) for several years should be accompanied by active restoration efforts to obtain desired results.

Manual and/or mechanical methods of plant removal can effectively control small isolated patches of D. polystachya. These methods, however, are extremely time and labor-intensive, as the large deep tuber make manual removal very difficult. All pieces of the tuber must carefully be removed or resprouting may occur. Populations will also need to be monitored for several years following plant removal as bulbils in the soil may germinate over several years. There is currently no information on how long these bulbils remain viable.

Peter Whan of TNC’s Edge of Appalachia Preserve System in southern Ohio reports that constant mowing or clipping D. polystachya at the base of the vine (top of the tuber) appears to eventually kill it. How often the shoots must be clipped and for how long of a duration, in order to kill the underground tuber, still remains to be determined. This removal of aboveground biomass appears to eventually exhaust the tuber, and indicates that perhaps a management regime of repeated grazing or burning may also work to kill the plant. These other methods, however, have not been tried.

Manually picking the aerial bulbils off the vines will not kill the plant, but will prevent the further spread of D. polystachya for a growing season. Once the bulbils have dispersed, hand-pulling the young germinating bulbils from soil can be an effective control measure if the entire bulbil is removed.

Herbicide application appears to be the most effective means to control D. polystachya in large infestations. One application of some herbicides can effectively kill all new germinating bulbils, but repeat treatments are probably necessary to completely kill large underground tubers that originally supported large mature vines.

The herbicides glyphosate or triclopyr have been the most successful at killing D. polystachya. Beyerl reports in her greenhouse study, that untreated bulbils had 100% germination, while treated bulbils (using glyphosate) had only 30% germination. Glyphosate also significantly lowered rates of plant growth from germinated bulbils as measured by stem length and numbers of leaves.

Dr. Tom Mueller, a professor at the University of Tennessee, recommends treating D. polystachya with either triclopyr in a 4% solution (4 parts Garlon® + 96 parts water or 3 quarts per acre) or with glyphosate in a 4 to 6% solution. He adds that no additional surfactant is needed with either herbicide for good (95%) control of D. polystachya.

Kristine Johnson, the Supervisory Forester at the Great Smoky Mountains National Park in Tennessee, reports that using triclopyr worked well to control D. polystachya. She adds that the timing of herbicide application is very important, as early season spraying when vines are small and young is not effective, but spraying later in the season on foliage was, apparently because at this time of year significant amounts of the herbicide were translocate to the tuber.

Beyerl however, reports that glyphosate applied to mature vines early in the growing season prevented the production of bulbils. It is unknown if Rodeo would effectively prevent established tubers from resprouting. She adds that applying a herbicide that is not active or persistent in the soil to bulbils during the dormant season can reduce risks to non-target species.

Although there are no conclusive results reported from long-term fire effects on D. polystachya yet, Kristine Johnson of the Great Smoky Mountains National Park has noted that sites burned in a wildfire from the previous fall, had reduced amounts the following year.

There are currently no available bio-control agents for D. polystachya. Snails and caterpillars have been observed browsing on leaves of this species, but do not appear to damage the plants significantly. Rodents and other small mammals also consume the bulbils, but the degree of consumption and damage to the plants has not been quantified. The exact species of these consumers have not been determined, nor has it been elucidated if they are specifically feeding on D. polystachya or are only generalist feeders.