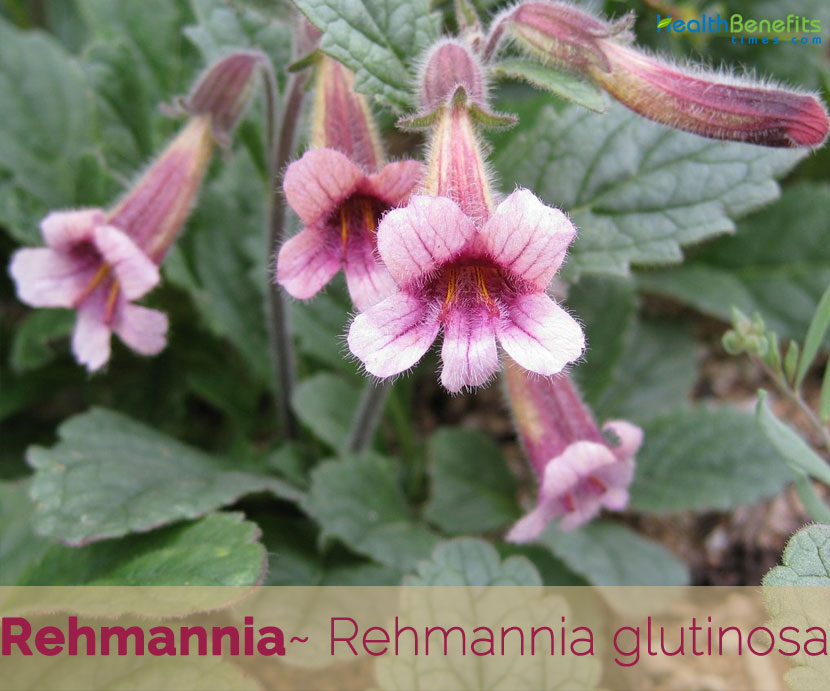 Rehmannia glutinosa, commonly known as Chinese foxglove is a perennial medicinal herb in the Scrophulariaceae family. The plant is native to northern and northeastern China, particularly in Hunan province and in Japan, and Korea. Chinese foxglove (Chinese name of di huang) is one of the 50 fundamental herbs used in traditional Chinese medicine. Roots are used to treat a number of aliments including adrenal and renal disorders. Chinese foxglove, Chinese rehmanniae Radix, Chinese RR, Di Huang, Gun-Ji-Whang, Japanese Rehmanniae Radix, Shu Di Huang, Sook-Ji-Whang and To-Byun are some of the well-known common names of the plant. It’s occasionally called Chinese foxglove because it looks somewhat like a foxglove flower, though the two aren’t actually related. (+)

Genus name honors Joseph Rehmann (1753-1831) German physician and botanist who settled in St. Petersburg. Specific epithet comes from the Latin word glutinosus meaning sticky or gluey in reference to the somewhat sticky condition of the leaves, stems and cooked roots. It is one of the most common and important Chinese medicinal herbs. The roots of this plant have been used in Traditional Chinese and Korean Medicine for over 2,000 years. (+,+)

Rehmannia is a small, hairy, rhizomatous, rosette-forming, herbaceous perennial plant that normally grows about 0.3 to 0.6 m tall and is covered with long, soft, gray-white, glandular hairs over the whole plant. The plant is found growing in well-drained stony ground along roadsides, in woods, mountain slopes, trail sides, hillside and field ridge. Root is thick and reddish yellow. The fresh and dried roots and rhizomes have a soft texture, with deep longitudinal wrinkles on the external surface and a darker central cortex. Stem is erect, simple or branched from base. Basal leaves are usually rosulate. Stem leaves gradually or abruptly decreasing in size or reduced to bracts upward. Leaf blade is ovate to narrowly elliptic, 2-13 cm long and 1-6 cm wide, base tapering, margin irregularly crenate or obtusely serrate to toothed.

Inflorescences are sometimes scapose. Flowers are axillary and solitary or in terminal racemes, pedicellate. Bracteoles may be present or absent. Calyx is 5(-7)-lobed. Corolla is purple-red or yellow, tubular; tube slightly curved or straight, dorsi-ventrally compressed, with 2 plaits from tube base to throat; limb 2-lipped, 5-lobed. Stamens are 4, didynamous, rarely 5 and 1 smaller than other 4, included; anthers coherent in pairs, locules fertile. Ovary base with a disc, 2-loculed, rarely 1-loculed; ovules numerous. Stigma 2-lamellate. Flowering normally takes place from April to June.

Fertile flowers are followed by many seeded, ovoid to narrowly ovoid, 1-1.5 cm long capsules that consist of nearly 300–400 seeds. Fruits start maturing from May– early June. The plant part for medicinal use is the root tuber

Rehmannia glutinosa has been considered a panacea in traditional Chinese medicine, primarily in combination with other herbs. Dried Rehmannia rhizome is reputed to “nourish the yin” and remove heat from the blood, and is used as a tonic for the liver. 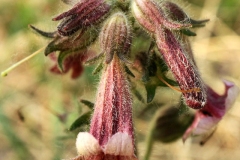 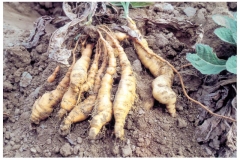 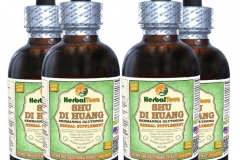 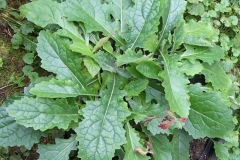 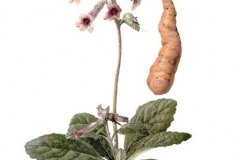 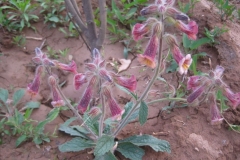 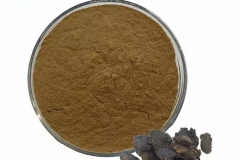 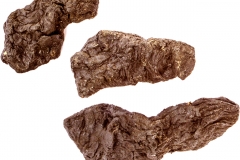 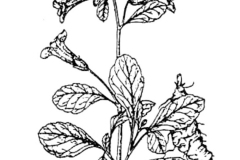 Rehmannia root consists of wonderful amount of Vitamin A, B, C, amino acids, and rehmaglitin, all of which have strong anti-inflammatory and anti fungal properties. This root prevents depletion of glycogen for hypoglycemia. It has a rich, starchy and sweet content that makes it effective as a cloying agent, which makes it good for improving liver function and digestion. Listed below are some of the popular health benefits of rehmannia

Rehmannia helps to prevents liver and lung cancer cells from growing and even kills them. Rehmannia activate cancer-fighting immune cells. Additionally, it may cause cancer cells to express proteins that slow their growth. Its antioxidants and nutrients reduced the side effects of chemotherapy drugs, while cancer-suppressing components may boost their effect. However, these effects have only been observed in cell studies, which may have no bearing whatever on animal or human bodies. Rehmannia-containing herbal concoctions improved responses to treatment when used in combination with chemotherapy. Rehmannia sugars inhibited the growth of lung and skin tumors.(1), (2), (3), (4), (5), (6), (7), (8), (9)

Research was done in people with nephrotic syndrome (a type of kidney failure); some people were given Liuwei Dihuang Pills as an add-on to standard treatment. The herbal pills improved kidney function better than the standard treatment alone.(10), (11), (12)

Rehmannia, alone or in combination with other herbs, holds promise for diabetes. Its components lowered blood sugar and improved kidney function in diabetic person. Aside from its effects on glucose control, it may also reduce diabetic complications.(13), (14), (15), (16)

Despite a long history of use as a remedy for allergies and asthma, there are few studies directly examining how Rehmannia affects these conditions. In rats with allergies, its extracts decreased inflammatory symptoms. Likewise, an extract of this herb lowered inflammation and skin lesions in mice with eczema. (21), (22), (23)

Rats with dementia given a Rehmannia extract performed better on memory and learning tests. Catalpol also protected brain cells in dishes and helped them survive the effects of bacterial toxins. Its brain-protective effects are perhaps closely linked to its ability to lower the stress response, neutralize free radicals, and affect important brain regions like the hippocampus.(24), (25)

Rehmannia is often described as an invigorator or a tonic – essentially, a substance to wake you up and make you feel more energized. In research higher doses of Rehmannia sugar extracts improved swimming endurance in mice. This point it’s probable to combat exhaustion and improve exercise endurance. Tonics like Rehmannia may help the body adapt to stress and increased physical demands. However, research on these effects is essential.(26), (27)

Rehmannia glutinosa has also been used traditionally to treat the various symptoms related to a woman’s menstrual cycle. According to traditional use, the herb can help relieve many of the symptoms linked to menstruation including pain and fatigue.

Rehmannia glutinosa is often applied topically to deal with dry and itchy skin and common inflammatory conditions like eczema. According to research, the herb has excellent antioxidant, anti-inflammatory and antimicrobial properties that make it an ideal treatment for various skin disorders.

Traditional uses and benefits of Rehmannia