Trending
You are at:Home»Foods»Facts about Salami 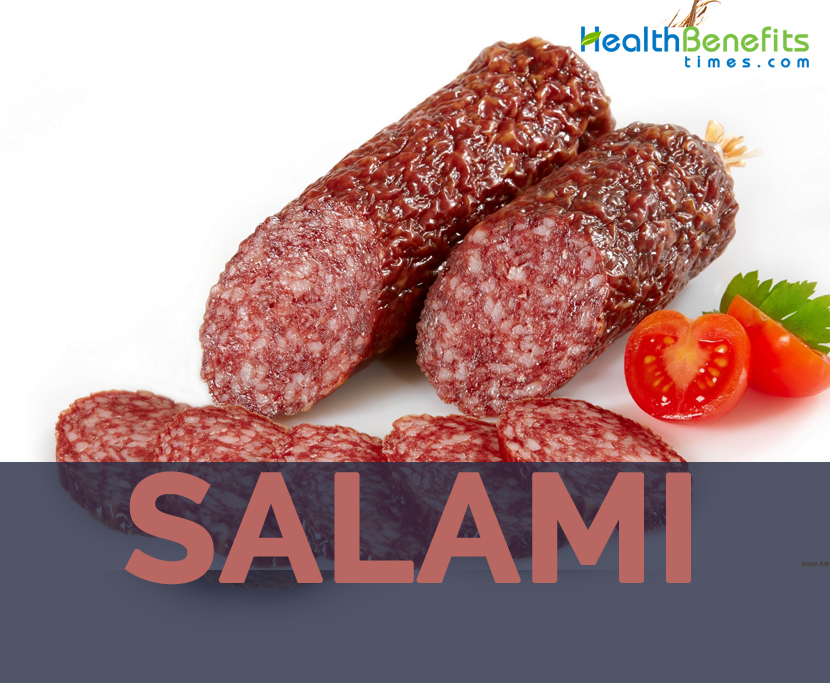 The word “salami” includes a range of cured, spiced sausage varieties with a firm texture. It is actually a type of cured sausage that consist of fermented and air-dried meat, normally beef or pork. Historically, salami was popular among southern and central European farmers because it stores at room temperature for up to 40 days once cut, supplementing a potentially meager or unpredictable supply of fresh meat. Countries and regions across Europe make their own traditional varieties of salami.

Different meats are frequently used to produce them, though beef, veal, venison, and pork are all fairly common. Salami is usually fairly hard, making it easier to slice thinly and ideal for use in sandwiches or enjoyed by itself. Salami is actually an Italian word, the plural form of salame, which is simply a term for any type of salted meat. With the rising popularity of salami, however, the term became connected primarily to one particular type of salted meat that was full into an animal casing and then allowed to cure. In English, the word “salami” is used for both singular and plural references to this one type of sausage.

Though the exact origin is unknown there is proof that a fermented sausage was made in the Mediterranean region more than 2000 years ago and became the preferred method of preserving meat for the Romans and Greeks.

The word Salami comes from the Italian “salare” meaning to salt. The Roman Legionnaires were often paid with salt, hence the word salary which also comes from “salare”. They then used the salt to make salami. Originally salami was just made from pork but more recently other meats including beef have been used.

Because salami is fermented it has many natural health benefits, for example, it contains lactic acid bacteria which can help maintain a healthy digestive system.

Traditional salami, with its typical marbled appearance, is made from pork or beef (occasionally specifically veal). Beef is usual in kosher and halal salami, which never include pork for religious reasons. Makers also use other meats, including venison and poultry (mostly turkey). Goose salami is traditional in parts of Northern Italy. Salami has also been made from horse meat. Typical additional ingredients include:

How is Salami Made

Salami is usually made from beef or pork that’s been ground, mixed with garlic, salt, minced animal fat (aha! the white bits!) and seasonings. This raw mixture is then stuffed into edible casings (i.e. the linings of animal intestines) and then allowed to “cure” through air drying.

“The curing process activates bacteria in the meat which makes the ground meat an inhospitable environment for dangerous bacteria that can cause meat to spoil,” explains Wisegeek.

Once the salami is cured, the edible casings are typically removed. If you buy unsliced salami, the casing is still intact and it’s recommended that you discard it before eating.

How to store the salami

Salami is a cured meat product and normally keeps for months don’t forget these products came about because years ago this was the only way to preserve meat there were no fridges. As a result, it can keep for months.

The best way to conserve whole salami and other cured meats is to keep them hanging in a fresh and ventilated place (about 10-15°C) where they will continue to mature. If that’s not possible, put them in the fridge in the compartment reserved for fruit and vegetables. Normally, the best way to taste salami is to eat it as soon as it’s cut. The salami should then instantly be tightly covered with plastic wrap around the cut surface – it will help to put an elastic band around the wrap to keep it stretched and avoid the air from entering underneath – and put in the fridge. Once started, if you notice that the cut end-piece of the salami has discolored, don’t worry this is simply due to slight oxidation as the air has got to it. The salt may also have started to crystallize on the end surface which may alter the taste faintly. You will see that it is just this end-piece that is affected and the rest of the salami is absolutely fine.

If you have uneaten slices remaining, they should be kept in an air-tight sealed box in the fridge to help the salami keep its organoleptic characteristics for as long as possible.

If the skin of the salami develops marks or discoloration on the skin, again don’t worry it is completely natural. If you wish, you can use a slightly damp cloth to gently rub the marks away but it really isn’t necessary.

How to cut salami

Salami and other cured meats are usually always best cut in fine slices (1-2mm) – so that they almost melt in the mouth rather than being overly chewy. You will also have a better balance of flavor in this way. Slice by hand with a sharp knife (rather a long, large blade) or it is better with a meat slicing machine. Exceptions are the fresher and softer salamis such as Finocchiona (fennel-flavored salami), Goose Salami, Truffle Salami – these are best cut in thicker slices (3-4mm) or diced and served with cocktail sticks.

How to use salami

That’s the wonderful thing about salami – it can be used in so many different ways. Suggestions are given on individual product detail pages, but here are some ideas:

Salami is not the healthiest choice as it is a high-calorie food and consists of high amounts of sodium and fat. And a considerable amount of fat in salami comes from saturated fat that can clog your arteries and increase your risk of heart disease. Just a serving of salami consists of 1890mg of sodium which can be possibly dangerous and perhaps can even elevate your blood pressure. Salami is not a rich source of carbohydrate so if you eat salami pair it with a healthy carb to boost your intake of carbohydrates.