Trending
You are at:Home»Foods»Tahini facts and health benefits 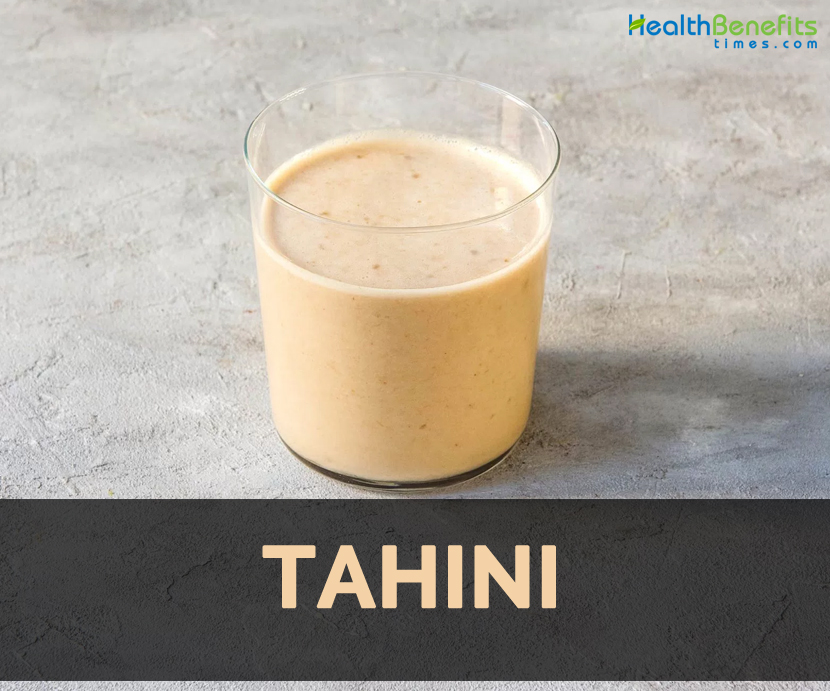 Tahini also called Ardeh or Sesame seed paste is a condiment which is prepared from toasted hulled sesame seeds. It is served in its own as a dip or as a major constituent of baba ghanoush, hummus and halva. It is used in the cuisines of Eastern Mediterranean region from South Caucasus, Balkans, Middle East to Northern Africa. Notably, it is also used in Southeast Asian and Chinese cuisines. Actually, Tahini is a brownish to creamy paste which is made from toasted sesame seeds. In United States, tahini is used like dips in hummus.

The word Tahini is derived from Arabic word tˤaħiːna (طحينة‎) means “to grind.” The term “tahini” appeared by late 1930s in English. An unprocessed and plain sesame paste with none of the ingredients added as known as raw tahini.

Sesame was mentioned in a cuneiform document that have been written 4000 years ago which describes the habitual action of serving sesame wine to the gods. Herodotus, a historian, wrote about sesame cultivation 3500 years ago in the Tigris region and Euphrates river in Ancient Iraq. Mainly, it is cultivated for the source of oil.

Tahini is acknowledged as an ingredient of hummus kasa which is a recipe that have been transcribed in 13th centuryArabic cookbook named Kitab Wasf al-Atima al-Mutada. The paste made from sesame is used as an ingredient in Korean, Chinese and Japanese dishes.

Listed below are some of the health benefits provided by Tahini:

Sesame seeds contain high content of oil by weight so tahini is silky smooth in comparison to other nut butters. It consists of 20 percent protein and 55 percent oil, both of which are well-known for essential amino acids and healthy fats. Due to its rich and nutty flavor, it is used in various recipes. Additionally, it benefits hormones, heart and also skin health. The fat in tahini is made up of beneficial compounds such as sesamolin and sesamin. It also contains linoleic acid, phenolic compounds, gamma tocopherol, oleic acid and amino acids such as tryptophan, lysine and methionine.

Tahini incorporates B vitamins such as thiamine along with minerals such as phosphorus, copper, magnesium, zinc, iron and manganese. The addition of tahini to the recipes is a good way to get copper that is essential for maintaining bone, nerve and metabolic health and also prevents deficiency of copper. It also holds iron that assists in preventing anemia that is a disorder represented by low counts of red blood cells, fatigue and iron deficiency. Vitamin A and B are crucial for metabolic functions, cognitive processes and also deals with stress.

Sesame seeds include antithrombotic properties that prevent the risk of cardiovascular problems and the effects in arteries such as cardiovascular health and acute coronary syndrome. Sesame seeds hold a type of nutrient named phytosterols that has effect on arterial health, hormonal levels and cholesterol levels. Plantsterols found in tahini are known as beta-sitosterol. Phytosterols is helpful in preventing arteriosclerosis which is caused by fatty buildup in arteries. It also improves cholesterol in body.

Phytoestrogens remained a controversial topic when it comes to the effect on hormones. As phytoestrogens act as estrogen antagonists and estrogen that makes it confusing to figure out. It affects body by attaching to estrogen receptors that confuses body on knowing either it has less or more estrogen.

Bad reputation is got by estrogen building foods. Not all the effects of phytoestrogens are bad. In post-menopausal women, they have low estrogen so the foods rich in phytoestrogen could be helpful to balance hormones naturally and maintain strong bones by reducing the chances of various diseases such as osteoporosis and cancer. In fact, increase in intake of phytoestrogen might be harmful as it could counteract some effects of hormonal imbalances which women experience as they become older. Studies have found out that the increase in phytoestrogens lowers menopausal symptoms such as bone loss, hot flashes, low sex drive, mood changes and weakness.

Sesame seeds have abundant amounts of vitamin E, amino acids, vitamin B, fatty acids and trace minerals that assist in rejuvenation of skin cells and also prevents the signs of aging. An intake of tahini also promotes skin integrity by enhancing fat as well as nutrient intake.

The oil extracted from sesame is used for treating burns, skin wounds, dryness and sensitivities so sometimes it is also known as “the queen of oils”. It contains antifungal and antibacterial properties that eliminate bacteria which could clog pores. The healthy fats are essential for making skin moist and to reduce inflammation. It also contribute minerals such as zinc that are required for repairing damaged tissue and form collagen that maintains the firmness and elasticity of skin.

Studies shows that sesame seeds enhance the absorption of protective fat soluble compounds such as tocopherol which is a major nutrient in Vitamin E that has vital role in preventing the diseases as person ages such as heart disease and cancer. The effects of consumption of seeds significantly increase sefum gamma tocopherol levels. Sesame helps to promote plasma gamma tocopherol and bioactivity of Vitamin E that is effective to prevent oxidative stress, inflammation and development of other chronic ailments.