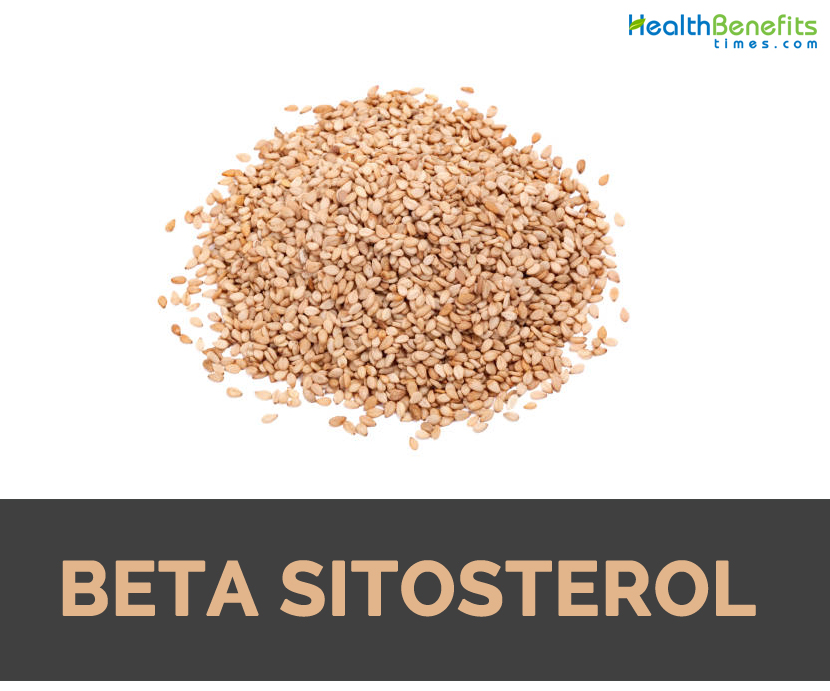 Although the term beta-sitosterol may seem unfamiliar, it is similar to another word everyone has heard, cholesterol. The sterol, which is a ringed compound, is in fact how the two are similar. Sterols are present in the cell membranes of both animals and plants. Although too much cholesterol, or the wrong kind, is unhealthy, cholesterol itself is absolutely necessary to maintain cell membranes in humans. Beta- sitosterol is the most abundant phytosterol (plant sterol), which performs the same function in plants that cholesterol performs in humans. Phytosterols include sterols and stanols, similar types of molecules that can also be called plant fats.

Beta-sitosterol is a phyto-pharmacological extract which contains mixture of phytosterols having smaller amounts of other sterols bonded with glucosides. Beta-sitosterol is a purported active constituent. Though the exact mechanism of action of ß-sitosterols is unknown, it may be associated to cholesterol metabolism and anti-inflammatory effects.

Beta-sitosterol has been used in Europe to lessen the symptoms of enlarged prostate glands for decades. It is a low-cost choice for a problem that affects many older men.

A review of existing data performed by the Cochrane Prostatic Diseases and Uro- logic Cancers Group, published in 1998 and verified up to date in 2008, summarized a number of high-quality trials. The group concluded that beta-sitosterol improves symptoms of prostatic hypertrophy including improved urinary flow and decreased residual urine after voiding, meaning the bladder is more completely emptied. Beta- sitosterol did not decrease prostate size. Long-term effects and safety were not assessed in these studies. Some other reviewers have come to similar conclusions.

Men are continuing to use beta-sitosterol for this reason, with few side effects. They also take saw palmetto, which contains phytosterols and fatty acids. There are urologists (doctors specializing in the urinary tract) that consider this therapy a reasonable alternative with some evidence beginning to accumulate. Some- where between 2 and 4 percent of men actually take saw palmetto, depending on their age, among other factors.

In one study, saw palmetto clearly improved symptoms but not measurable results in terms of urinary flow or retention. The investigators stated, “Saw palmetto led to a statistically significant improvement in urinary symptoms in men with lower urinary tract symptoms compared with placebo.

Beta-sitosterol is used the most frequently in testing. It has been shown to inhibit tumor growth in vitro (in a lab). In mice it has slowed tumor metastases. Since beta-sitosterol is incorporated into cell membranes, changes there could affect the growth or death of cancerous cells.

One in vitro study looked at beta-sitosterol along with tamoxifen to see its effect on breast cancer cells in a laboratory setting. Tamoxifen is an antiestrogen drug used to treat breast cancer. Looking at cells treated with both indicated that beta- sitosterol might increase the effectiveness of tamoxifen.

Not every investigation has found a correlation between plant sterols and lowered risk of cancer. One study in the Netherlands found no relationship between a high intake of phytosterols and colon or rectal cancers.

In one study, beta-sitosterol modulated the release of inflammatory chemicals from blood cells of a patient with multiple sclerosis in a laboratory setting.

There are many ongoing trials of phytosterols in laboratory settings, using animals and cell cultures. There are epidemiologic studies looking at associations between phytosterols and various diseases. Most of the research involving clinical testing is in the cholesterol-lowering area, trying to define the best doses and vehicles for phytosterols. There is also research on benign prostatic hyperplasia.

Study shows that beta sitosterol lowers levels of LDL or bad cholesterol without affecting HDL or good cholesterol. It lowers cholesterol absorption in intestines by 50 percent.

In order to be incorporated into food, phytosterols and phytostanols must be esterified. The recommended dose of phytosterols is 1 to 2 g per day. This is often consumed as part of a margarine-like spread, so the dose is not exact. Amounts above 3 g do not show any further benefit but can lower vitamin levels in the blood- stream due to its effect on absorption. Many trials have given the sterol or stanol three times a day. However, the same LDL cholesterol-lowering effects have been seen using one daily dose, putting the sterol or stanol in milk or meat, and adding it to a normal or low-fat diet. Most of the data indicate that LDL cholesterol will be lowered in any of these ways. Capsules of 300 mg are sold, often containing a mixture of all the sterols.

Some might experience side effects from Beta-sitosterol such as nausea, gas, indigestion, or constipation. These are bothersome but not harmful.

Beta-sitosterol affects male hormones such as dihydrtestosterone and testosterone.

Some people might experience allergic reactions such as difficulty breathing, swelling, hives, rash and change in blood pressure or heart rate.

Beta-sitosterol may lower ability to absorb carotenes and vitamin E. These people can prevent deficiencies by consuming food with high vitamin E.

Sitosterolemia patients have too much of beta-sitosterol in their bodies so its addition could cause clog in arteries and damage heart. This could result in heart disease.

Beta-sitosterol might react with Pravastatin (Pravachol) and Ezetimibe (Zetia).