Trending
You are at:Home»Fruits»Think before you drink: Know about available drink alternatives 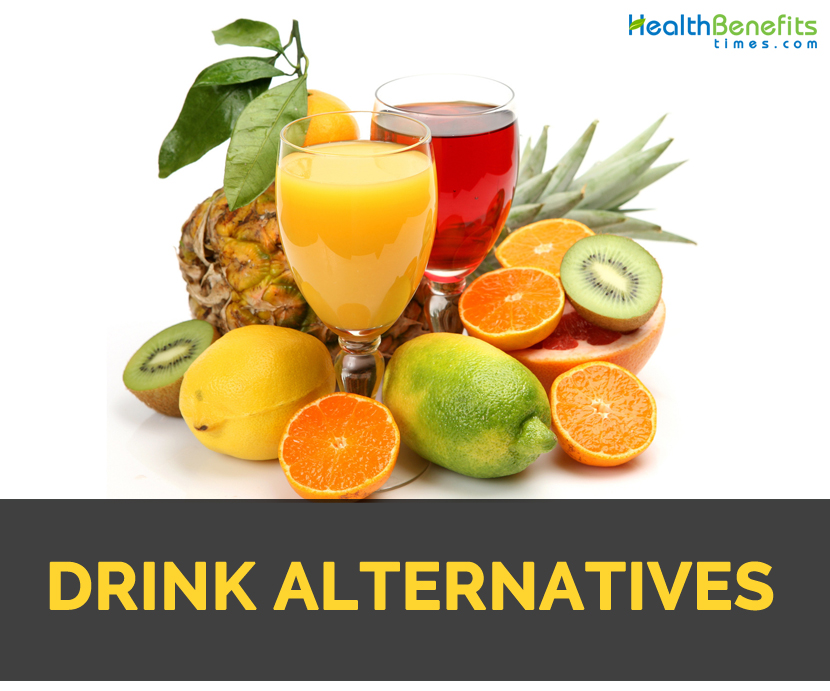 The human body relies on safe water as an essential component of healthy living. With so many popular beverage options available, plain water is still the ideal fluid to consume daily. Water is free of sugar. It doesn’t contain caffeine, calories, food dyes, or artificial ingredients, and it’s refreshingly good for you. With a growing number of bottled drinks on the market, the type of drink one choose can influence health and performance more than one think. There is a time and place for sports drinks, and even the occasional soda or glass of wine, but water will always reign when it comes to the health and wellness of your body.

Cities invest millions of dollars to provide the public with pure and safe drinking water. Although tap water often gets a bad rap—the residents of Flint, Michigan, have a lot to say on this subject—it’s often just as good as what one find in a bottle, and without the plastic. Below is a quick summary of the kinds of water available:

If one craves a refreshing drink, carbonated water is a great alternative to soda. It lacks the calories and added sugar of soda but still provides a naturally sweet and revitalizing taste. There is some misconception that carbonated drinks can weaken bones and cause tooth decay. As long as bubbly beverage is free of citric acid, sugar, and phosphorus, there’s little risk to your health. Carbonation occurs when water is infused with carbon dioxide, giving it a slightly acidic pH. The trendy SodaStream kit is an example of an at-home seltzer water carbonation system that comes with a reusable BPA-free bottle.

In Europe, seltzer, sparkling, and mineral waters are extremely popular. The primary drawbacks of carbonated water are bloating and gas. Drink any type of carbonated beverage too quickly, and you may experience discomfort in your gut.

If one is a tea drinker in a coffee-obsessed world, it would be delight to hear that there are minimal downsides to drinking tea. With far less caffeine than coffee, and rich in flavonoids and antioxidants, tea is highly praised for its many health benefits. Research from the journal Current Medicinal Chemistry shows that green, black, and white teas contain properties that can help fight free radicals and reduce the risk of heart disease and cancer. Popular herbal teas include ginkgo biloba, ginseng, rosehip, chamomile, echinacea, and hibiscus, and they may boost immunity, assist in weight loss, control appetite, promote restful sleep, and reduce stress.

While herbal tea enthusiasts claim benefits, tea is not a magic bullet. It should be incorporated into an overall healthy diet. Instant teas lack nutrients, contain very little tea, and have high amounts of sugar or artificial sweeteners. Some alternative medicine professionals believe tea holds properties that can fight or prevent cancer, but research has yet to prove this. In some cases, consuming tea is discouraged. Green tea should be avoided when one is taking blood-thinning medications such as aspirin, ibuprofen, naproxen, and warfarin because of negative interactions with these medications.

Nearly one billion people in the developing world lack access to safe drinking water. For those who live without clean water sources, the multibillion-dollar water industry makes it easy to take accessible, clean water for granted. Although water in a bottle can be a healthier choice, there’s growing concern about the environmental footprint of bottled water. According to National Geographic, nearly 91 percent of all plastic bottles don’t get recycled. Instead, they accumulate in a plastic-filled landfill or in the ocean. When plastic bottles end up in the sea, animals, the environment, and the land are negatively affected. What’s more, plastic bottles contain bisphenol A (BPA) and phthalates to make the container clear, hard, and flexible. But both components have shown to be endocrine disruptors and are linked to a host of damaging health issues.

Coffee is a global addiction, a staple morning beverage. Coffee connoisseurs will agree that it’s the best, and only, way to start the day. Whether one like it, love it, need it, or can’t handle it, coffee is one of the most commonly consumed beverages in the world, second only to water. In 2016, the World Health Organization removed coffee from the list of potentially carcinogenic foods, and it is now considered “probably harmless and possibly healthy.” If one don’t like coffee, there’s no need to start drinking it, and if one drink it, there’s no need to give it up. Coffee is a central nervous stimulant, though, so drink it in moderation. Since one cup of coffee contains 80 to 100 milligrams of caffeine, a maximum of 32 fluid ounces a day is a safe recommendation. Coffee is naturally calorie-free, but if one add sugar, milk, and/or whipped cream, it’s an entirely different story. A 16-ounce iced peppermint white chocolate mocha is more like a meal at 500 calories!

Caffeine naturally occurs in coffee beans and other botanical sources such as chai, oolong, black, and green teas. The caffeine content varies, from 80 to 150 milligrams in an eight-ounce coffee to 30 to 80 milligrams in a serving of black or green tea (three-minute brew time).

Caffeine is a drug. Its side effects include insomnia, restlessness, stomach upset, nausea, increased heart and breathing rates, and anxiety. Its impact on the cardiovascular system can’t be overstated; there’s always a risk of death when caffeine is improperly used or overconsumed.

Naturally caffeinated drinks such as coffee and tea are generally safe. The same can’t be said for manufactured caffeinated beverages, which don’t require FDA approval before distribution. What’s more, it is not mandatory for the makers of these drinks to list the exact amount of caffeine on the label. This is cause for concern, because each drink may actually contain up to 400 milligrams of caffeine, which is equivalent to four (8-ounce) cups of coffee. Other undeclared ingredients and proprietary formulas found in manufactured caffeinated beverages may go against the anti-doping codes of many sports organizations. For instance, synephrine is banned by the NCAA, and octopamine is banned by the World Anti-Doping Agency (WADA); both are chemical stimulants found in over-the-counter energy supplements.

Always go for pasteurized over raw. If you need an alternative to cow’s milk, not to worry—there are several:

Lactose-free milk contains all the wonderful nutrients found in cow’s milk but with added enzymes to aid in digestion. Flavored milk may contain all the major nutrients found in unflavored milk, but it also includes sugars, thickeners, emulsifiers, and artificial colors and flavors. Although chocolate milk is advertised as the perfect post-workout beverage, plain cow’s milk is just as good for recovery.

Be aware that most dairy-free beverage alternatives have long ingredient lists. Take one glance and one’ll see food gum additives, added sugar, and isolated fibers. Unless purchasing decisions are dictated by medical, religious, or ethical issues, your best bet for health is to go with milk fresh from the source—the cow. One may also want to consider making your own plant “milk” by blending raw nuts (almonds, cashews, hazelnuts), seeds (hemp, pumpkin, flax), or grains (quinoa, millet, rice, oats) with water. Homemade milks are easy to make, plus they’re free of additives and preservatives.

Although it’s yummy to drink fruits and veggies, there’s no sound evidence that liquid produce is healthier than whole produce. When produce gets “juiced,” the end product provides vitamins, minerals, and phytonutrients, similar to that of the whole food, but the fiber is lost in the process. Real juice is free of added sugars, but drinking it is a very easy way to overconsume natural sugars and fat-free calories, compared with eating a whole fruit or vegetable. However, juice is a quick source of fluid, vitamins, and minerals, so athletes might opt for it to assist in rehydration, especially after an intense or long workout or competition, when they lack an appetite for real food. If you want to drink juice after a workout, dilute it with water. Keep to a 1:2 juice-to-water ratio, and add a pinch or two of salt to provide a solution similar to that of a rehydrating sports drink. Also keep in mind that juice uses a different intestinal sugar transporter than glucose. Once in the bloodstream, the beverage is taken up by the liver to be processed into a usable fuel source for the muscles. This can take up to 90 minutes. Because of this, juice isn’t recommended as a sports drink during exercise.

At one time, energy drinks were synonymous with sports drinks as a way to boost concentration, enhance performance, and delay fatigue. Nowadays, thanks to clever marketing strategies, many people believe that energy drinks, such as 5-Hour Energy, Monster Energy, NOS, Red Bull, and Rockstar, are just as effective as, if not better than, sports drinks. In actuality, most energy drinks contain sugar and calories, while sports drinks are scientifically designed to provide the correct formulation of ingredients to replenish electrolytes, fluids, and carbohydrates.

The purpose of an energy drink is to give you a boost from caffeine and other stimulants. Side effects include dehydration, excessive urination, insomnia, headaches, jitters, restlessness, irritability, and an increased heart rate. If one consumes energy drinks in excess, one is at risk of cardiac arrest.

Many athletes rely on energy drinks after a restless night of sleep or during times of high stress and fatigue. Keep in mind that a high-sugar, high-caffeine drink is simply masking unsustainable lifestyle of being chronically stressed, overtrained, or exhausted. Energy drinks tend to be an abused, addictive, and costly habit.

Some people claim there are health benefits to alcohol consumption, but moderation is key. For healthy adults, moderate alcohol use is defined as one drink a day for women and two drinks a day for men. One drink can be classified as 12 fluid ounces of beer, 5 fluid ounces of wine, or 1 ½ fluid ounces of distilled spirits.

There are no health benefits to heavy drinking. From an athletic standpoint, the use of alcohol, even in small amounts, can negatively affect hydration status, recovery, sleep, motor skills, motivation, judgment, and overall performance. It can also cause weight gain, nutritional deficiencies, depress immunity, and elevate cortisol (the stress hormone that is linked to weight gain). Because of the large variance of alcohol tolerance among active individuals, athletes are strongly discouraged from consuming alcohol before, during, and after exercise, and during competition season.