Trending
You are at:Home»Health & Beauty»Top 12 Brain and Memory Boosting Supplements 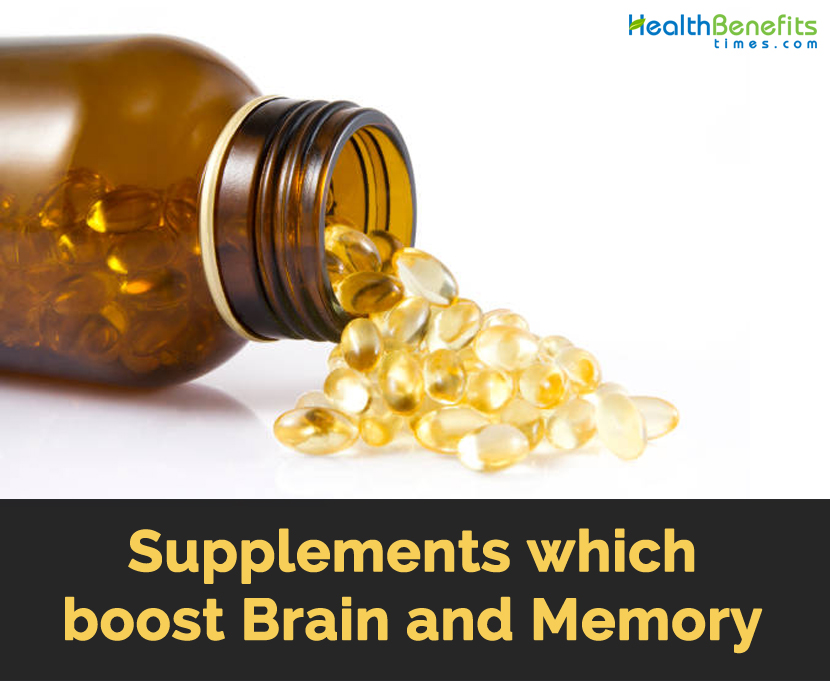 Specific nutrients found in supplements can improve brain function. Look to B vitamins first. That’s because the entire B complex acts as a lubricant for cellular function, and a deficiency can lead to memory loss and impaired cognition. Vitamin B1 helps the brain transform nutrients from protein and glucose. It can help mental fatigue as well as memory loss and confusion. A vitamin B2 deficiency can lead to impaired brain development in the young and behavior problems. Without niacin, you may be more prone to depression, short-term memory impairment, and anxiety. Vitamin B6 helps to produce the neurotransmitters dopamine and serotonin.

Vitamin B12 is an essential nutrient in myelin, the fatty sheath that surrounds the nervous system. Low levels can contribute to memory loss. Vitamin B12 also helps brings oxygen to the brain cells and reduces inflammation. Highest sources of B12 are liver, blue-green algae such as chorella and brewer’s yeast. You can also take B12 sublingually (under the tongue). Research published in the medical journal Neurology (2011) shows that those who don’t have enough B12 are more likely to score lower on cognitive tests and even have smaller brains!

If you have brain fog or difficulty remembering, you probably have a B12 deficiency that needs to be treated. In fact, a study in Finland published in Neurology in 2010 found that if you consume foods rich in B12, you can slash your risk of Alzheimer’s later in life. Fogginess and problems with memory are two of the top warning signs of vitamin B12 deficiency, and this is indicative of its importance for brain health.

Folic acid is necessary for the production of RNA and DNA, which is essential for memory and learning and for growth in children. The B vitamin choline increases the brain’s rate of metabolism and the metabolism of fats. From this nutrient, the brain makes acetylcholine, which is the most important neurotransmitter involved with intelligence, memory function, and maintaining the structural integrity of the synapses. Acetylcholine diminishes as we age. Choline stimulates its production. DMAE (dimethylaminoethanol) is chemically similar to choline and helps to make and maintain neurotransmitter function, improves memory, and elevates mood.

Lecithin is used in Europe to treat senility. It helps in fat metabolism. Lecithin accounts for about 30 percent of the dry weight of the brain. When buying lecithin, look for brands that contain at least 30 percent phosphatidylcholine. Both choline and lecithin have been found to be helpful in Parkinson’s disease. Human breast milk is much higher in lecithin than cow’s milk. The other important component in lecithin is inositol, which co-functions with choline as a fat metabolizer and brain enhancer. Vitamin B12 can help in the synthesis of RNA.

Phosphatidylserine is a phospholipid that has exhibited the ability to improve memory and cognitive capabilities. It helps maintain the integrity of brain tissue and the fluidity of cellular membranes, thus benefiting neuron transmission. It naturally occurs in brain cells, and amounts tend to decrease as aging occurs.

Vitamin E helps protect the brain from freeradical damage and in turn delays the onset of dementia. Researchers for the Okinawa Program in Japan studied vitamin E levels in Okinawan elders and found that their blood level of vitamin E was 30 percent higher than that of Americans. Elders there naturally eat superfoods such as sweet potatoes and foods that are high in vitamin E like nuts, seeds, olives, olive oil, vegetable oils, avocados, wheat germ, whole grains, and leafy green vegetables. If you don’t get enough vitamin E from your diet, supplements can help.

Note: If you take blood-thinning medication, it’s very important to check with your doctor before taking any vitamin E supplementation.

A lack of vitamin C can lead to hypersensitivity, fatigue, and depression. Vitamin C is also an antioxidant, protecting delicate nerve cells. Vitamin C can be found in fruits (especially citrus) and vegetables, including green and red peppers, tomatoes, and green, leafy varieties like spinach and collard greens. Note: Vitamins C and E work synergistically to protect against dementia.

Calcium and magnesium are needed for proper brain function. Boron helps to promote mental alertness. Iron helps to make neurotransmitters and DNA. Without magnesium we may be more prone to confusion, lethargy, and depression. Potassium is needed to maintain normal levels of neurotransmitters. During pregnancy, zinc ensures proper fetal brain growth. There is a considerable amount of zinc in the brain.

8. Beta-carotene and vitamin A

Beta-carotene and vitamin A help carry more oxygen to the brain and help prevent fatigue. Research in the Journal of Neurology, Neurosurgery and Psychiatry showed that low levels of vitamin D affect brain function. Increasing the amount of this nutrient in the body either through sun exposure or supplementation can help keep you mentally fit as you age.

Amino acid therapy can improve your mental capacity to enjoy the world. L-glutamine readily crosses the blood-brain barrier and becomes glutamic acid. It serves as brain fuel and as a protective agent. L-methionine nourishes brain cells and aids choline’s ability to promote thinking. L-phenylalanine works as a neurotransmitter. It gets converted into norepinephrine and dopamine, which are neurotransmitters that promote mental alertness. L-taurine is an antioxidant, an electronic regulator for nerve cells, and chemical transmitter for the brain.

L-tyrosine stimulates the production of dopamine, norepinephrine, and epinephrine, promoting alertness and awareness; it is even mood enhancing and motivating. Low levels of dopamine can contribute to depression, autism, schizophrenia, and hyperactivity. N-acetylcysteine is an antioxidant that helps to make glutathione. It improves cognitive function, and stabilizes neurological deterioration. Coenzyme Q10 also functions as an antioxidant and decreases from our brains as we age. Consider octocosonal for short-term use such as with brain damage occurring from head injury, stroke, or shock.

Omega-3 essential fatty acids are important because the brain is made up of 60 percent fat. Neurons are also made up of fats and neurological tissue, or what we would call white or gray matter. DHA (docosahexaenoic acid), the most abundant fat in the brain, and EPA (eicosapentaenoic acid) in omega-3 fatty acids improve the health of the cells of your central nervous system and provide structural support, so neurons can communicate. Breast milk contains DHA, which is why it’s recommended that babies are breast fed if at all possible.

Low DHA levels have been linked to memory loss and Alzheimer’s disease, and the older you get, the more you need DHA. A study published in the medical journal Alzheimer’s and Dementia in 2010 showed that degenerative conditions such as these can be prevented and even reversed. Elderly volunteers who had memory problems showed improvement after taking 900 mg of DHA for 24 weeks.

Other research has shown that DHA also helps with verbal fluency. Even better, when combined with 12 mg of lutein, memory and rate of learning improved.

Research conducted at RMG Biosciences of Baltimore showed that extracts of ginger (Zingiber officinale) and galangal (Alpinia galanga), a member of the ginger family, helped inhibit the manufacture of inflammatory brain chemicals, and in turn slowed down the progression of neurodegenerative disorders such as Alzheimer’s.