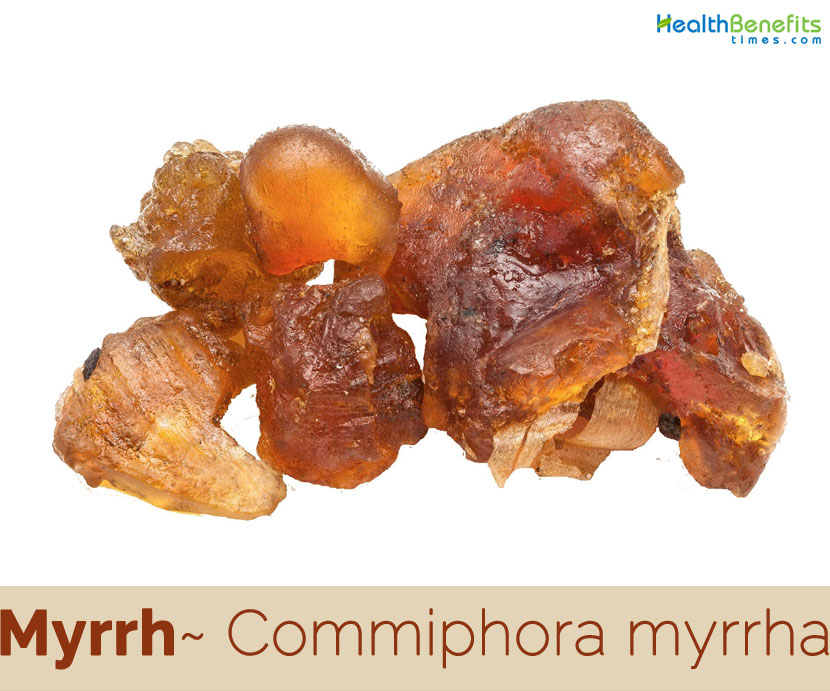 Commiphora myrrha, called myrrh, African myrrh, herabol myrrh, Somali myrrhor, common myrrh, or gum myrrh belongs to Commiphora species and Burseraceae family. Commiphora mukul, a related species, is not a source of myrrh. It is one of the primary trees used in the production of myrrh, a resin made from dried tree sap. The tree is native to southwest Asia, including Arabia, and most commonly east and northeast Africa near the region of the Red Sea or Arabian Gulf, specifically Ethiopia, Somalia, and Kenya. More than 150 different variety of this same species tress have abundantly grown in this area. The common name Myrrh is derived from a Hebrew and Arabic word “mur, murr or maror “, which means bitterness or acrimony. The genus name Commiphora is from the Greek “kommi”, meaning “gum”, and “phoros”, meaning “carrier”.

Myrrh is a resinous secretion of the Commiphora myrrha trees. Native users collected the resin from myrrh by making incisions into the bark. A yellowish oleoresin is exudate from these bark incision marks. Exposure to air makes the resin dry and hardens, which then gradually turns to reddish-brown. Myrrh has been used in perfumes, incense, and embalming, and, as a symbol of suffering, was one of the three gifts believed to have been offered to the infant Jesus by the Magi. Myrrh is also one of the oldest known medicines and was widely used by the ancient Egyptians. It is an excellent remedy for mouth and throat problems, with a drying, slightly bitter taste, and it is also useful for skin problems.

Myrrh is a small thorny, deciduous tree or a large shrub that normally grows up to 5 m high and 1.5 m wide. The plant is found growing in thickets in desert scrub land, open Acacia, shallow soil, chiefly over limestone. The plant does best in thin soil, primarily in areas with limestone. The plant has a thick, light gray trunk with sharp spines protruding from its main branches. C. myrrha is a very variable species. The different forms seem to merge so imperceptibly that the recognition of infra specific taxa is often difficult.

Trunk is swollen, flaky, thick, and hairless throughout, it has peeling silvery, whitish, reddish or bluish grey papery-bark, the under-bark is green and photosynthetic, it produces knotted spiny branches, and branchlet that stand out at right-angles, ending in a sharp spine. Stem exudate a hardly scented, viscid, translucent yellowish gum-resin. The wood is yellowish-white.

Leaves are chartaceous, greyish green or glaucous, very variable with petiole 1–10 mm. long.  Few lateral leaflets are sometimes very minute, may nearly always be found on both long- and short-shoot leaves, but most leaves may be without them or they may be up to half the size of the terminal leaflet, which maybe elliptic, spathulate or lanceolate, attenuate, cuneate, rounded or truncate at the base, rounded or acute apically, 6–44 mm. long, 3–20 mm. wide, with 3–4 rather weak main veins on each side, ultimate vein network obscure; margin entire or with up to 6 rather large broad teeth on each side. The tree sheds its leaves in autumn and the leaves turn yellow before falling off.

Fertile flowers are followed by Ovate, smooth, brown, 2-4 mm long fruit, surrounded at base by a 4-toothed calyx, and supported on a very short stalk.  Seeds are smooth with gentle swellings. Myrrh is propagated from seed in spring or from cuttings at the end of the growing season. 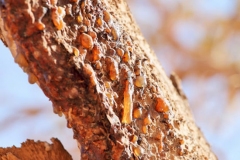 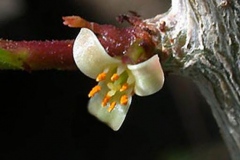 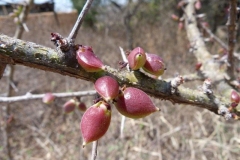 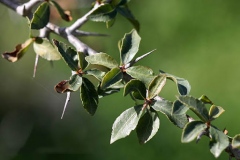 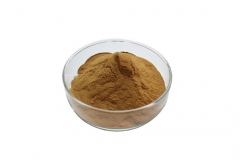 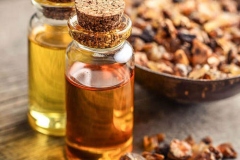 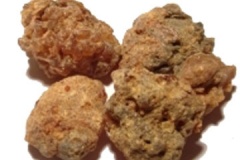 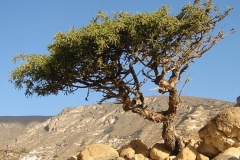 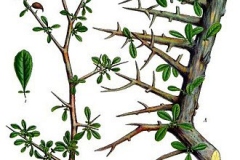 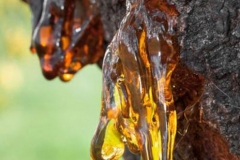 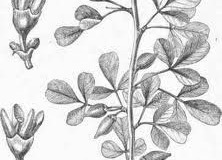 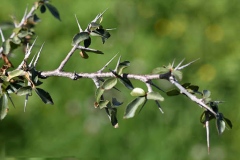 Below are some of the popular health benefits of using myrrh

Extract of Myrrh consists of good amount of bioactive phytochemical furanodienes which actually has the strength to ease headache. Research conducted in both male and female participants reported that Myrrh help to reduce the pain score of the subjects with a headache. Research also described that a minimum dose of Myrrh is quite effective to manage headache.

Since ancient times, Myrrh has been used to treat pain, but research done within the past couple of decades has sought to explain why it works. Research on combined effects of frankincense and myrrh found that a water extract made from both resins inhibited a specific neurotransmitter in mice responsible for causing pain, while yet another study conducted on mice with chronic pain found that myrrh has the potential to help patients struggling with neuropathic pain. Since this mouse study is not 100 percent conclusive, but the results are certainly motivating.

Anti-inflammatory properties of myrrh oil may help treat gingivitis, though more research is needed. However, research has discovered that myrrh-containing mouthwashes promote the healing of oral wounds. It is also recommended not to use myrrh-based products for more than two weeks at a time or in large doses, as the extract could end up damaging tissue.

Myrrh is mostly used as an antiviral and antibiotic. It helps to encourages white blood cells to help your immune system fight infections, and additionally has direct antimicrobial effects. It is commonly used for dealing with common cold, respiratory infections, sore throat, ear infections, and swollen lymph nodes.

Application of Myrrh extract is an effective treatment to treat joint pain including osteoarthritis. Analgesic property of Myrrh not only effective to control pain in the joints also reduces the stiffness. Thus, patients with mild osteoarthritis get benefitted by application of Myrrh oil. Myrrh extract consists of sufficient amount of calcium which helps to maintain bone health.

According to a research published in the November 2007 issue of “Holistic Nursing Practice.” Terpenoid compounds present in myrrh give it potential anticancer benefits. Researchers also concluded that myrrh offers potential as a natural therapy for treating prostate cancer.

Prepare a soft gelatin capsule by encapsulating 2 drops of Oregano oil and Myrrh oil along with 4 drops Melaleuca and Coconut oil. Take this combination therapy trice a day with a meal to deal with Candida Infection.

Back pain becomes a common pain symptom due to improper postural issues, or strenuous physical activity. Instead of using frequent synthetic analgesic medication, Myrrh extract is an effective alternative treatment of lower back pain. According to one clinical research 400 mg of Myrrh extract is effective to deal with the condition.

Prepare an herbal preparation by including 1 drop of Oregano oil, 2 drops of Myrrh and 4 drops of Melaleuca and Lavender oil. Apply this combination therapy on around the nail bed and on the top of the nail twice a day until the infection decreased.

Ancient Greeks and Romans were surely on the right track by using Myrrh to treat wounds. Scientific research now confirms that Myrrh essential oil when mixed with Sandalwood is effective at killing the microbes that infect skin wounds. Another research found that Myrrh essential oil used alone prevents the growth of the fungi that causes athletes foot by 43 – 61 percent. Apart from that many other skin conditions, including; weeping eczema, bedsores, boils, acne and deeply chapped skin can be cured using myrrh.

Experts often suggested chromium supplement to individuals who have a higher risk to develop diabetes, as deficiency of chromium has co-relation with diabetes prevalence. Myrrh has a sufficient amount of chromium in it and may be effective to prevent diabetes.

Myrrh consists of good amount of Curzerene and sesquiterpenoids which have antibacterial, antifungal, and anesthetic property, which protects against infection.

Muscle ache with joint pain symptom is a common distressing condition often related with other ailments like a fever. This type of pain also occurs after active physical activity. Research concluded that 400mg of Myrrh extract is effective to treat muscle ache.

Due to its analgesic property, Myrrh is effective to treat menstrual cramps or dysmenorrhea if the symptom is not related with an organic cause. Myrrh extract with 200 mg dose is an effective treatment to control dysmenorrhea. Sufficient amount of iron is also present in Myrrh, which may prevent amenorrhea.

Research at the Beni-Suef University in Egypt concluded that Myrrh can actually detoxify what the liver cannot – particularly, ammonia. When the liver cannot eliminate dangerous substances sufficiently, they build up in the bloodstream. For example, ammonia, a by-product of protein digestion, needs to be converted into urea in the liver and eliminated via the kidneys. Accumulation of ammonia in the blood, called hyper-ammonaemia, is toxic to nerves and can lead to a weakening of brain functions known as hepatic encephalopathy. Excessive ammonia is mostly dangerous because it worsens the over-production of nitrogen and oxygen free radicals.

Traditional uses and benefits of Myrrh